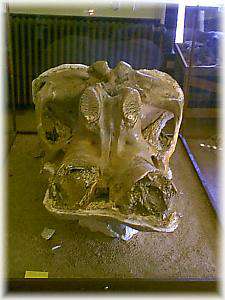 Displayed in the Horace Greeley Museum is the skull of a prehistoric mammoth. The skull, which is mostly complete, has a special room. Sealed in a Plexiglas case in the middle of the room are the huge molars, a lower mandible, tusks, and cranium still intact. The skull is exhibited upside down, just as it was found.

The treasured acquisition was discovered in the spring of 1987 by area farmer, Bruce Koehn. He was checking a pond in a pasture southwest of White Woman Creek following a rainstorm that left portions of the county floating in 5 1/2 inches of water. The rain had caused considerable gully erosion. Startled by the whiteness of the ivory, Bruce spotted the fossil half buried in sand. Immediately he went for help.

Taking care to properly excavate with plaster of paris, a pallet was placed underneath the skull. Then, a crane lifted the skull out of the ground. The area became an outdoor science lab for area residents. People came from all around to watch the skull emerge from the ground. Koehn announced he wanted the fossil donated to the museum, "to be sure it stayed where it belonged."

The community is proud of the fossil which has been identified as a female Columbi Mammoth, dating back to 11,000 BP (before present). Displayed with the skull is a painting which depicts a mammoth as it would have appeared roaming the region 12,000 years ago by area artist, Terry Lee.

Where is the rest of the mammoth? Museum curator, Nadine Cheney, and others believe it might have been washed down the creek over the years. "Two to three miles from the site, we were picking up ivory from the mammoth tusk. A lot of people recall finding bones in the area long ago," she said. Also, dogs may have carried bones away. She is certain of one thing - there are no more mammoths where this one came from.


Come visit us in Tribune, Kansas

To Tribune calendar of events

Things to do Archaeology near Tribune, KS