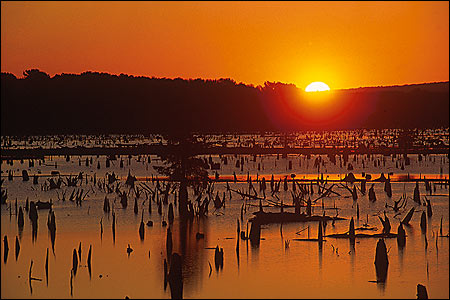 A bustling college town that is one of the fastest growing communities in the state, Conway is located approximately 30 miles northwest of Little Rock. Being the home to not one but three colleges - University of Central Arkansas, Hendrix and Central Baptist - means there's always something going on whether it's a theatrical production, an art exhibit, a concert or a lecture by a nationally known speaker. The Arkansas River and Lake Conway provide excellent fishing while Beaverfork Lake is popular for water recreation. Shopping and antiquing prospects abound as do opportunities for both fine and casual dining. The city's annual early May festival - Toad Suck Daze - is one of the largest and most popular in the state.

Lake Beaverfork lies along the east side of Ark. 25, north of the Conway city limits. There is a boat ramp available for boating, fishing and skiing. The park also has picnic, sports and swimming areas.

Located on the grounds of the Faulkner County Courthouse, this home was built in 1830 east of Conway and was restored in 1966 by the Faulkner County Historical Society. An excellent example of the dog-trot style of architecture, it is open for tours spring through fall.

The largest Game and Fish Commission lake in the country at 6,700 acres; popular for catfish, bream and bass fishing.

To Conway calendar of events

Things to do near Conway, AR

Home of all Arkansas Governors since its completion in 1950. Has private and public rooms, historical grounds. A bust of form...

EMOBA (The Museum of Black Arkansans)

Located on the grounds of the Faulkner County Courthouse, this home was built in 1830 east of Conway and was restored in 1966...

Course At River Oaks, The