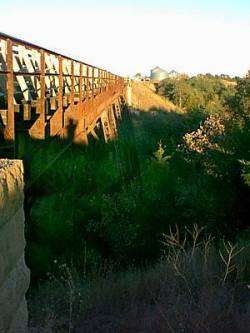 By the late 1800s, the United States saw railroad tracks stretched, like a giant web, across its entirety, carrying cargo and travelers towards settlement in the West. Long silenced, abandoned, and almost forgotten, a hundred years later the rails are beginning to see travelers once again. They're not riding the "iron horses" but real horses,bicycles, and walking on their own two feet. The rail corridors are now used for exercise and leisure, taking in the scenery, local culture and history and simply getting away from the everyday work and pressures of a fast paced life.

The north central region hosts one of the newest and most highly anticipated rails-to-trails conversions - Nebraska's Cowboy Recreation and Nature Trail. The Cowboy Trail stretches for 321 continuous miles, travels through three major ecological zones, crosses 221 bridges and bisects 31 towns and eight counties. When the entire trail is open it will be the longest rail-trial corridor in the country. The anticipation is beginning to build throughout the region. Chamber of Commerce receive mail daily inquiring about the possibility of riding, biking or walking the Cowboy Trail. Managing the 321 mile, 3,893 acre linear park across the State of Nebraska will be a joint venture between the communities and the Nebraska Game and Parks Commission.

The historic Chicago and NorthWestern railroad "Cowboy Line" corridor right-of-way extends from west of Norfolk to Merriman and is for use as rail-trail, while from Merriman to just east of Chadron the Nebraska Game and Parks Commission has interim use of a 30-foot easement from NEBkota Shortline. This will be rail-with-trail where hikers and equestrians will share the easement with an active rail line. You will pass through some spectacular scenery by being routed through the Elkhorn River Valley, traveling through O'Neill to see the historic O'Neill Depot, on through native hay country of Atkinson, to the historic structures and amenities in Stuart, traveling native prairie lands to Newport, on to Bassett where the trail through town leads to the historic Depot and caboose. Traveling on to Long Pine and over the 115-foot-high decked bridge which spans the Long Pine Creek, on to Ainsworth with a trail leading to the main park with camping facilities, through historic Johnstown, over the prairie to the 147-foot-high decked railroad bridge near Valentine. Small towns and farmsteads dot the landscape along the quiet timber covered Niobrara River, then on to the ranches and hay country, over the grass-covered Sandhills where a wide variety of wildlife can be seen and heard during the quiet of the day or night. Come join us on the Cowboy Trail!

Come visit us in Ainsworth, Nebraska

Things to do Recreation near Ainsworth, NE