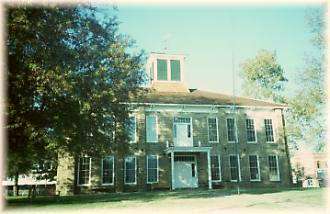 The heart of Okmulgee is the town square featuring the Creek Council House Museum. Erected in 1878, the museum building is listed on the National Register of Historic Places and is acknowledged as a National Historic Landmark. The Museum was established in 1923 by the Creek Indian Memorial Association as an education center for those wanting to learn about Native American History.

The Council House was constructed to serve as the Capitol of Muscogee (Creek) Nation. All tribal affairs were conducted in these building. The facility contained separate chambers for the Executive and Judicial branches of the government, with the Legislative branch divided into the House of Kings and House of Warriors.

The museum's permanent collection of archives chronicle the sociocultural history of the Muscogee (Creek) people before and after their forced removal from their tribal homes in Georgia and Alabama. In addition, each year Native arts and crafts are displayed through temporary exhibits, art shows, and the Council House Indian Art Market.

In 1993, the Creek Council House Museum underwent a one million dollar renovation, which earned a National Preservation Honor Award from the National Trust for Historic Preservation.

The Red Stick Gallery offers a variety of elegant Native American gifts, such as jewelry, bead work, pottery, and baskets.

Come visit us in Okmulgee, Oklahoma

Things to do Museums near Okmulgee, OK