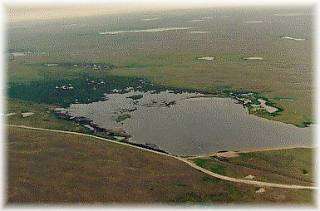 Crescent Lake National Wildlife Refuge is part of a nationwide system established for the preservation of waterfowl. The 48,000-acre refuge is approximately 30 miles north of Oshkosh in the Panhandle of western Nebraska. Wildlife found on the refuge include Canada geese, snow geese and most species of ducks. Upland birds, including grouse and pheasants, are abundant. Prairie chicken, deer, antelope, coyotes, raccoons, badgers, owls and golden eagles are also included on the refuge. Established in 1931, this hilly grassland dotted with numerous shallow lakes is part of the 12 million-acre \"Nebraska Sandhills.\"

The sandhills became a cattle ranching country during the 1870\'s and 1880\'s when the bison gave way to the Hereford and the soft footfall of the Comanche pony was replaced by the foot beats of the cowboy\'s work horse. Then the land was considered open range, the size of one\'s ranch limited only by one\'s ability to take and hold it. Encouraged by the Homestead Act and the Timber Claim Act, setters began flocking to the region, claiming most of the land by 1890. New railroads and the Kinkaid Law of 1904 brought a final rush of landseekers, ending the days of free range and completing settlement of the State.

These homesteaders attempted to farm their land, but, because the soil was almost pure sand, such ventures proved unsuccessful. Most of the small landowners sold out to the cattle ranchers or allowed their land to go to the county for unpaid taxes. Thus the region reverted to large livestock spreads and so it remains today.

For untold centuries, the numerous vegetation-chocked lakes of the sandhills have provided abundant food and cover for migrating and nesting waterfowl. The sandy soils readily absorb and hold rainfall. Because of this underground storage, the larger lakes contain some water even during drought. In the late 1920\'s when the continuing decline of waterfowl became a national concern, steps were taken to establish a refuge in the sandhills. An initial land purchase was completed in 1931 and Crescent Lake Refuge became a reality. Subsequent small purchases and land exchanges increased the refuge to its present size.

Because the wetlands are randomly scattered, it was necessary to purchase a large tract of prairie grassland to provide the needed lakes and ponds.

Headquarters - Refuge headquarters are 28 miles north of Oshkosh and 28 miles south of Lakeside, Nebraska. Few sandhill roads are surfaced, and while travel with almost any vehicle is possible over the better roads, the side trails are traveled most safely with 4-wheel-drive vehicles.

Birding - Numerous species of waterfowl, shorebirds, and song birds find a home in this prairie area. seeing and hearing long-billed curlews, sharp-tailed grouse, and both species of meadowlarks can make an outing in late April or early May most rewarding. Peak spring songbird migration occurs May 10-20 and the fall peak occurs in September. 273 species of birds observed on the refuge is compiled from records beginning in 1936. A list may be obtained from area headquarters or from the U.S. Fish & Wildlife Service.

Fishing - Island Lake is open to daylight fishing year around in accordance with State regulations. A Nebraska fishing licence is required. Possession or use of live or dead minnows is prohibited, as is possession of any fish not taken from the refuge lakes (Island or Smith). However, dead smelt may be used as bait. No overnight shelters permitted. Fishing is not permitted on any other lake at this time.

Boating - Boating is permitted on Island Lake only. Internal combustion motors are prohibited.

Hunting - Refuge hunting is permitted in accordance with applicable State and Federal regulations. A Nebraska hunting license (or, if appropriate, big game permit) and habitat stamp is required.

All deer harvested must be checked in at the Refuge Headquarters.

Grouse and pheasant hunters are asked to participate in an ongoing and valuable population study by providing a grouse wing and pheasant leg from each bird harvested.

Things to do Wildlife Refuges near Oshkosh, NE