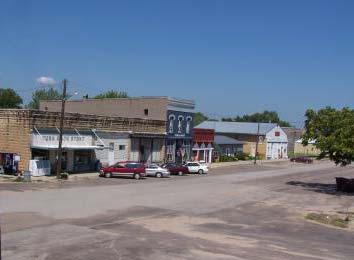 National Geographic Magazine featured Cuba, Kansas in the May, 2004 edition, a community that is one of the Midwest's best kept secrets. A permanent exhibit of photographer Jim Richardson's images of the people and events of the community show the best of life in rural America. The photos are on display in the Cuba Antiques & Collectibles shop. Jim has been coming to Cuba to photograph life in a small town for the past 30 years and has become the "adopted" son. Cuba and Jim were fetured on the CBS Sunday Morning show which was filmed during the National Geographic Celebration.

Ramble down Cuba's Main Street and stop to chat at the grocery store where you can watch homemade bologna and jaternice' (an ethnic Czech food) being made, sit for coffee and a home-cooked meal at the cafe, browse for antiques and gifts at Cuba Antiques & Collectibles, se3lect plants and flowers at the greenhouse, get your hair fixed, or have your car serviced while in town.

While in Cuba, visit the historic Cuba Community Hall (Ceska Narodin' Sin - The Bohemian National Hall) built in 1930, which also houses a rollar skating rink and Senior Citizens Center, as well as other sites around town. Recently remodeled in 2004-2005 to include an elevator and handicap accessibility.

As a gift to Cuba, Glenn Lojka, a Cuba native who now resides in Manhattan, KS, completed a stone carving. The stone is 7 feet 8 inches tall; 5 feet 2 inches wide; 18 inches deep; and weighs 8,000 pounds. In this carving is a Czech immagrant family of the late 1800's just unloaded at the train station in a new world. Glenn started the project in the summer of 2004 and completed it in May, 2005. A dedication ceremony was held on July 16, 2005 during the Harvest Festival and the stone carving is now permanently displayed on Cuba's main street.

For over 30 years, Cuba has hosted the Rock-A-Thon each March, an ethnic festival of Czech food, enternatinment and the round-the-clock rocking hcair motion to raise funds for community events.

Looking for a new hometown? Consider peaceful living in a safe, small town with all the modern anemities close to education, groceries, banking, health care and entertainment opportunities. Enjoy a comfortable, slow-paced country lifestsyle at an affordable price.

You have to go where everyone knows your name!

1) The original location was a school 2 1/2 miles north and 3 miles eas of present day Cuba. This is also where the Post Office was established on March 23, 1868. The second site for Cuba was moved one last time to its third and permanent location, 1 mile south of Highway 36 to accomodate the railroad.

2) Lawrence Welk once played in the Community Hall. The High School used to play their ballgames there, also!

3) Two railroads used to run through Cuba (the Rock Island and the Burlington).

4) If you stand on one end of Main Street, you can see the other end!

5) The Rock-A-Thon started out in the Laundromat!

6) There used to be dance halls and a roof garden in Cuba.

7) Cuba has been featured on CBS twice in the last 20 years!

Come and "Czeck Us Out!"

Things to do near Cuba, KS