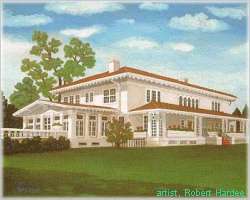 The Ponca City Cultural Center Museum is the former home of Ernest Whitworth
Marland, tenth Governor of Oklahoma, who came to Ponca City to visit the 101
Ranch. He remained to build a vast oil empire. He was the founder and president of Marland Oil Company, now Conoco Inc.

After making a fortune in oil, in 1916, he built the 22-room house located at 1000 East Grand Avenue. It is listed on the Oklahoma Landmarks publication as one of
Oklahoma's outstanding architectural accomplishments. The hanging staircase is one of its most beautiful features, and the home boasts one of the first indoor swimming pools in Oklahoma. Inside the center and museum are more than 4,000 priceless exhibits, including relics, artifacts, paintings, and other memorabilia dating back to the early 1700's.

The City of Ponca City bought the home in April, 1967, to house the Ponca City Indian Museum. Started in 1936, the Ponca City Indian Museum had long outgrown its space in the basement of the public library. In 1968, the Indian Museum was moved to the Cultural Center and dedicated. In 1972, the attic room was opened as a DAR Memorial Museum. The basement houses not only Native American items, but also 101 Ranch memorabilia. When the City bought the Bryant Baker Studio, it also was moved into the center and provides a step-by-step review of the building of the Pioneer Woman Statue.

During the heyday of the oil empire, the Marland home provided magnificent gardens which spanned 8 acres. The grounds were designed by Marland's Japanese gardner, Henry C. Hatashita, and a golf course was included on the grounds. Reminders of Marland's love of beauty and nature still can be seen in the majestic trees, shrubs and beautiful parks of Ponca City. A major attraction of the Cultural Center, the Indian Museum contains a priceless collection of artifacts representing more than 30 tribes from across the United States. It is located on the lower level and the second floor. Arrowheads, knife sheaths, moccasins, and an Osage Wedding Costume are among the thousands of artifacts on display. Two of the most historically significant relics are original peace treaties signed by the U.S. Army and the Kanza Tribe in 1815 and 1825. The Indians signed the 1815 treaty in blood. The museum, which was established in 1936 by the City of Ponca City, places special emphasis on materials from the five neighboring tribes: the Ponca, Kaw, Otoe-Missouria, Osage, and Tonkawa. Their artistic use of beading, finger weaving, and ribbon work is demonstrated in displays throughout the museum. Visitors will also see relics from Fernandina, an early French-Indian Trading Post that dates back to 1719 and is said to be the first white settlement in Oklahoma. Generous gifts from citizens have made it possible to display ethnological and archaeological materials of other tribes, including a vast collection of Navajo, Hopi, Quiliute, Klamath, and Tlingit artifacts. Exhibits of
Contemporary arts and crafts are also displayed throughout the year.

The Daughters of the American Revolution (DAR) Memorial Museum was formally opened on February 20, 1972, and contains relics and artifacts that date back to the birth of this country. A 13-star U.S. flag, picked up on a Revolutionary War battlefield, is just one of the remarkable items on display. The museum is patterned after the DAR Museum in Memorial Continental Hall in Washington D.C. Articles featured here are accepted through a museum committee and must meet the historical, education, and patriotic objectives of the National Society, Daughters of the American Revolution. The DAR Memorial Museum is located on the third floor of the Ponca City Cultural Center and Indian Museum.

Things to do Museums near Ponca City, OK