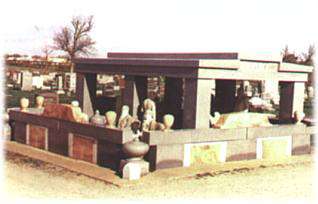 The Internationally known Davis Memorial is located just three blocks north of U.S. Highway 36 & 73 junction and east 1/2 mile in Mt. Hope Cemetery. There are eleven life-sized figures depicting John & Sarah Davis at various stages of their married life. All but one of the statues, which is granite, were made of Italian marble by Italian craftsmen and positioned at the memorial between 1931 and 1934. The marble canopy over the main section of the memorial weighs 105,000 pounds -- more than 50 tons! The Davis Memorial has been featured on \"Ripley\'s Believe It or Not\", Newsweek, Life, and People magazines. Each year the marble and granite display is visited by 20,000 to 30,000 people from across the United States and around the world. The Davis Memorial is one of the nations most unusual tombs.

John Milburn Davis erected this memorial to \"the sacred memory\" of his wife, Sarah. After she died in 1930, he almost immediately commissioned the work to begin.

In every sense it was a monumental project. The lifesize Italian marble statues of the Davises were striking in their detail and their accuracy. The cost of the memorial was staggering in a small town during The Great Depression. The stubbornness of Davis toward his project in the face of public criticism was prelude to a legend.


Come visit us in Hiawatha, Kansas

Things to do Memorials near Hiawatha, KS

At the south end of Horton on Highway 159 and 4th street, on the west side of the road, is an unusual small park. This park w...