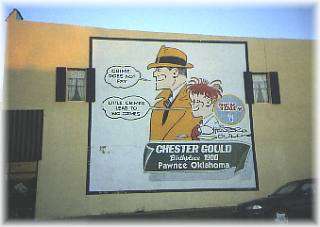 Chester Gould - Born in Pawnee, Oklahoma in 1900, Chester Gould started drawing at age seven and graduated from Pawnee High School in 1919. On August 30, 1921, a 21 year-old young man, lonely but full of ambition, arrived in Chicago by train. With $50 in his pocket, a suitcase and a portfolio, he was ready to hit the big time cartoon world.

Part of that precious money went to buy a drawing board and tabaret to put in his $6 a week room on North LaSalle Street.

To be a cartoonist for the Chicago Tribune had been this man's goal since he was a boy. Now, he would pursue this. What he didn't know was that it would take 10 years working on other papers while submitting ideas to the Tribune before one would catch J.M. Patterson's eye.

Then, it happened! A new concept in comic strip stories was presented to Patterson. It was a detective story, filled with action and fast-pace, the first of its kind - Dick Tracy was born.

On October 4, 1931, Dick Tracy first appeared in the Detroit Mirror, one of the Tribune- owned papers, then in the New York Daily News, then the Tribune and one and one taking the country by storm.

So popular was the strip that it appeared on the front page of the New York Daily News for 45 consecutive years, and it was seen in 27 foreign papers.

The drawing board and tabaret that have found a permanent home in the Chester Gould-Dick Tracy Museum, Woodstock, Illinois, are the same ones purchased by that young man who was filled with ambition on that hot day in August of 1921.

Things to do Arts near Pawnee, OK

Visitors to the Eufaula Dam will enjoy seeing an interesting 8 foot by 16 foot mural painted by Indian artist, Monroe Moore, ...