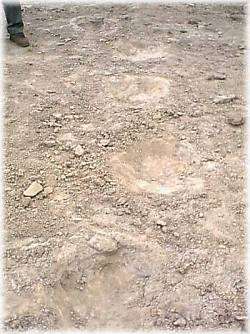 A series of dinosaur tracks in a strata of solid rock may be seen in the bed of a creek near the Black Mesa. The area where the tracks are found was at one time a swamp and forest area. At times, following flood conditions the tracks are covered with several feet of silt. At other times, gushing torrents along the waterway uncover the tracks completely. Immediately before the Boise City annual Trail Daze event, the tracks are swept clear of debris.

There are three sets of tracks in the creek bed - the main set, a shallower but similar set about 50 yards upstream, and a smaller and much more eroded set downstream. These tracks are in Jurassic formation - sandstone - 150 millions years old. These tracks were probably made by plant-eaters because of the large size of the tracks and the webbed toes. (Meat-eaters left smaller tracks [except for the Tyrannosaurus] and were pointy-toed.) You can tell the size of one of these dinosaurs by measuring across the tracks (18") and multiply by four, giving you the hip-height . . . in this case about 6 feet. Therefore this dinosaur, from head to tail, was about 25 - 30 feet long, walked on hind legs (since no front leg prints are visible) and did not drag a tail. Tracks close together indicate walking slowly along a beach or pool, maybe foraging for food. If you look closely you can actually see how the dinosaur's weight pushed the mud up to one side on each step. Almost all tracks found worldwide are so eroded you can no longer see the mud pushes.

Why did the dinosaur come here and nowhere else in Oklahoma? What did the land look like 150 million years ago? Most of the United States was underwater. . . there was an eastern ocean and a shallow, brackish western one. A long peninsula ran from the southwest through Kansas, Cimarron County, and into New Mexico. That's why Jurassic tracks are found here but nowhere else in Oklahoma. This was the beach where it was hot and muggy with lots of huge cypress trees. . .all the dinosaurs came here for vacation!

Were the tracks made the same day? The two larger track ways were probably made about the same time. . . but the smaller set downstream may be several million years older! There were LOTS of dinosaurs in this area for many years. From bones found in this area it is known that there were brontosaurus, stegosaurus, allosaurus, as well as iquanodon/camptosaurus, and also much smaller dinosaurs, some about the size of a chicken! There were also phytosaurs, which were huge alligator-looking critters up to 50 feet long. Their teeth have been found in quarries near here.

During the early 1930's, several dinosaur quarries were opened and excavated. More than 18 tons of fossilized prehistoric animal bones have been taken from Cimarron County quarries. A reassembled brontosaurus skeleton measuring 80 feet in length, 40 feet in height, and 85% complete is now on display in the Smithsonian Institute in Washington, D.C. This dinosaur weighed 80 tons and was at least 80 feet in length, 24 inches across the base, and 21 inches across the upper end. The bones weigh 425 pounds. Five distinct species of dinosaur were found in the same quarry. Other quarries in the same general area have given up parts of the remains of giant mammoths in the form of tusks, skull and other parts.

Please remember when visiting these sites that they are located on private property. Please respect these sites and the landowners.

We currently do not have any events for Boise City, Oklahoma in our database. If you know of events taking place, please add the event
.