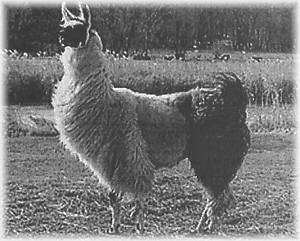 The Dickman family have a registered herd of seventy llamas ranging from breeding quality to showring quality reaching $5000. The family travels to llama shows from Texas to Utah.

According to Leslie Dickman, every llama has his or her individual personality. Llamas are a herd animal and very social and must have a companion animal to live with to thrive. Llamas are a member of the camel family and have a split lip and split hoof. Throughout the centuries, llamas have been used as pack animals in the Andes Mountains of South America, and recently have been used as guard animals for sheep, therapeutic animals, and pack animals for back country camping in the United States. The Llama originated in North Central Nebraska millions of years ago and moved south into South America where it adapted and remained. The wool from llamas is greaseless, featherlight, and does not need to be processed before spinning into yarn and the meat from llamas is 11 per cent leaner than buffalo meat.

Rainbow Llamas host an annual Llama Trek at Nebraska National Forest for llama enthusiasts that is co-sponsored by the Nebraska Llama Association. Last year 65 individuals and 29 llamas enjoyed a day's hike in the beauty of the National Forest at Halsey and a barb-e-que at the Rainbow Llama Ranch.

Come visit us in Thedford, Nebraska

You can see the trees and beautiful sand hills countryside for miles when you climb to the top of the Scott Lookout Tower. Visitors may view the sandhills scenery and tree plantations as well as learn about forest fire spotting techniques. The stairway to the observation deck is steep;

Things to do One Of A Kinds near Thedford, NE