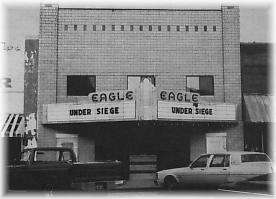 With the advent of television, followed by video rentals, the old movie theaters suffered throughout the nation. Sometimes, however, a theater continues to operate because it offers something more than facilities, because it is, within itself, more magical than the fantasy plots it shows. In Stilwell, such a phenomenon exists; and it has entertained Adair Countians for five or more generations.

Early history of the Eagle Theater is vague, but the "Opera House" was the 1920s forerunner of today's theater. The Phillips family - first father and later son - operated and later purchased the business, and it was relocated to the spot where it has remained. The Phillips' only remodeling effort occurred in 1953 when the long lights inside the auditorium were added and the restrooms were redone. After that, only the technical equipment was occasionally updated.

Stilwell's Eagle Theater was in danger of being closed permanently following the deaths of the last Phillips owners until longtime residents, the Migglettos, showed an interest in buying the business. When they tackled the massive cleanup job they discovered just what they had bought. In dusty corners and stacked on tables and shelves they found treasures - an early carbon arc projector, old lights, and dozens of vintage movie posters, some piled on tables, others repacked into their original cylinders 40 years ago. They discovered that the technical equipment now in use was purchased in 1960. They learned that several of the seats came from the original opera house, and that a second section was almost as ancient. They discovered a 78 rpm record player along with a collection of records from the Big Band Era - and there is a possibility the player itself is even older.

Today, stepping into the Eagle Theater is like going back in time at least 30 or possibly 40 years. The unique smell of richly buttered movie popcorn (popcorn machine circa 1946) drifts into the street, and the owners sell tickets and serve soft drinks at the new counter, an absolutely necessary modern addition that replaced an ancient soft-drink vending machine.

In the theater itself, one can sit in the same seat one's grandfather sat in 60 years ago. The tiny 45 (or perhaps 55?) year-old lamps glow as the long, modern (only 39 years old) lights dim and the 31 year-old projector begins, offering movies six nights a week.

Things to do Historic Theatres near Stilwell, OK