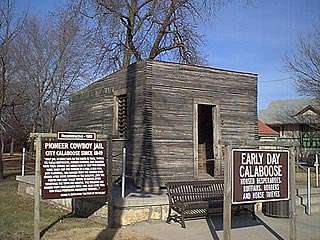 Desperadoes, ruffians, robbers and horse thieves all "bunked" here in this early day calaboose (jail), built in 1849. It was said to be the only jail on the Santa Fe Trail at the time. Other Durland Park attractions: the Sylvan Park Depot, a privately-owned railway station built by T. W. Whiting for the convenience of his wife and visitors to Sylvan Park Ranch; and the old KATY Depot, built around 1895 and in use until 1957.

The one-room Field School, closed at the end of the 1945-46 school year, is remarkably well preserved. It was moved from its original site 8 miles south of Council Grove to Maple Camp in 1999

Things to do Pioneer Life near Council Grove, KS

The stone building was used to house prisoners before the courthouse was finished in 1883. ...

The pioneer 1883 jail on Allen Street can be seen by appointment. ...