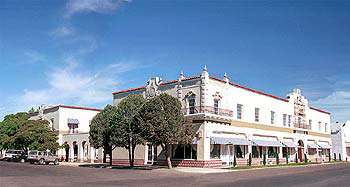 The Hotel Paisano was built by Charles Bassett of El Paso and opened in June 1930. The Paisano was for the most part a cattleman's hotel for its first 40 years. Ranchers from all over the area had business meetings here and bought and sold their herds from the lobby of the hotel. The railroad depot was two blocks away so many rail travelers stopped in for a night in their travels between California and San Antonio. The hotel was also the prime location for social events within a 100 mile radius of Marfa. Many weddings, parties, receptions, proms and meetings were held at the Paisano.

In 1955 Warner Brothers chose Marfa as the location for the filming of the epic movie Giant. In June of that year the cast and crew including James Dean, Elizabeth Taylor and Rock Hudson made the hotel their headquarters. Today, the hotel still has many visitors that come to see and remember Giant. James Dean's hotel room here is one of the most popular that we have to offer. In July 2005 the Chamber of Commerce is having a 50th anniversary celebration of the movie with hopes to attract some of the stars from the movie.


Come visit us in Marfa, Texas

The Hotel Paisano was built by Charles Bassett of El Paso and opened in June 1930. The Paisano was for the most part a cattleman's hotel for its first 40

First reported by early settlers in 1883, the mysterious glowing orbs still defy explanation. Since then the legend, and the surrounding curiosity, has grown. What once was a Texas-based story of interest has captured national recognition.

The Chinati Foundation is a contemporary art museum founded by the late artist Donald Judd, dedicated to the creation and preservation of permanent installations of large-scale works or large groups of work by a small number of artists, located on a 340-acre site of the former Fort D.A. Russell.

Marfa Municipal Golf Course is the highest golf course in Texas, at 4,882 feet above sea level with nine holes, 18

To Marfa calendar of events

Things to do Historic Hotels near Marfa, TX

Few other historic hotels offer a more unique experience of days gone by than The Gage Hotel in Marathon, Texas. The restored...