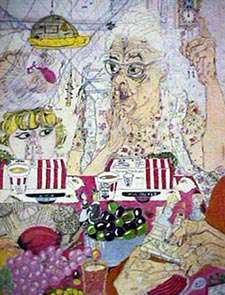 When Elizabeth "Grandma" Layton,who lived in Wellsville, began creating art at the age of sixty-eight, she unwittingly embarked on a steady ascent to national recognition, the culmination of which was a one-woman show at the Smithsonian Institution. Although her work received national exposure, she refused to sell it. Art was important to her purely as self-expression. She used her works to make social commentary and to aid causes she supported.

Elizabeth "Grandma" Layton was born in 1910 and took her first and only art class in 1977. One of "Grandma" Layton's drawings, Thanksgiving done shortly after she took up art, depicts herself presiding over a formal holiday dinner of Kentucky Fried Chicken and Oreo cookies while in the background struts a turkey that didn't get killed. At the other extreme, ten years later, "Grandma" Layton drew Pulling the Plug, a dying woman kept alive by a respirator, raising her hand to "pull the plug" and end her life. She was no primitive. Her style is refined and sophisticated. She's a master of lucid irony and displays great insight into both herself and others. Elizabeth Layton did not come to painting and drawing after a long, happy life as wife and mother. Layton's life's story is one of poverty, unhappiness, divorce, extended periods of depression, and the death of her only son. It was, in fact, after this last, most devastating tragedy, that her sister urged her to take a contour drawing class at Ottawa University in Kansas.

Elizabeth Layton started out with crayons and colored pencils on lined notebook paper. She moved up to a sketch pad from K-Mart. Eventually, she started using something more archival. She practiced drawing herself from a mirror. In Mona Lisa, drawn in 1978, she pictures herself at the age of 69, white-haired, in imitation of Leonardo's famous portrait but surrounded by a birthday cake, dentures, high heeled shoes, a bottle of Bayer aspirin, a telephone receiver, and for some unknown reason, the White House. Her self-portraits lack even a trace of idealization. And there was to be no quaint genre landscapes drawn from nostalgic memories for "Grandma" Layton. She tackled searing social issuses such as abortion, AIDS, censorship, "Fat Pride," the ERA, euthanasia, aging, and loneliness. Even her whimsical works have a cutting edge.

When she died at the age of 83, she left behind over 1,200 drawings. She seldom sold any. Most, she gave away. Today her work fetches between $2,000 and $5,000 with one having sold at auction for as high as $10,000. Over 250 museums nationwide own her work. Soon, she'll be featured in her first international exhibit at the Halle Saint Pierre museum in Paris. No, she's not "Grandma" Moses, and it may be a while before her work reaches the six-figure range. But that doesn't stop people from making inane comparisons and citing sharp contrasts. Doing both, a critic has called "Grandma" Layton's work "...like Grandma Moses on Tobasco sauce."

Prints of Elizabeth "Grandma" Layton can be viewed at the Wellsville City Library.


Come visit us in Wellsville, Kansas

Ask people in Wellsville, Kansas, what they think of country music and even thought their opinions may vary, they'll always smile with pride when they talk about Chely Wright. The country music star, who has topped the charts and won the hearts of millions of fans, grew up in this town of 1,600

To Wellsville calendar of events

Things to do Famous People near Wellsville, KS

John Steuart Curry was born in 1897 and was raised on a farm six miles north of Oskaloosa. He completed the usual farm chore...