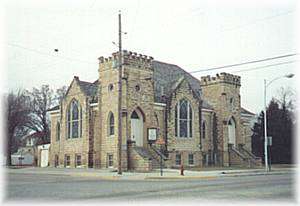 Nestled in the midst of downtown Ellis stands a stately two-story limestone building at Eighth and Washington Streets which serves as the museum and
headquarters for the Bukovina Society. The Bukovina Society Headquarters-Museum maintains a collection of artifacts from Bukovina emigrants, along with a small library of books. A computer is also available for members to access our Bukovina genealogy databases which contain over 10,000 names. Microfilm copies of some Bukovina parish registers are held at the Ellis Public Library. An archive of additional material is also located at the Center for Ethnic Studies at Ft. Hays State University, in Hays, Kansas.

The Bukovina people--Lutherans from the Rhine-Palatinate and Wuerttemberg in Germany and Catholics from the Bohemian Forest of Austria, migrated to virgin forests of the Austrian Empire in the late 1700's and early 1800's. They set up glassworks, wood products industries, and farming. Although a minority in their new country, they lived in ethnic German communities and neighborhoods preserving their language and customs.

Annually in mid-July the Society holds an international convention on Bukovina heritage in Ellis. The society has published three books and networks with other similar societies to share information. A computer record of society member's genealogies is current on-line.

The museum will be opened for any visitor at other hours by calling one of the board members listed on the mailbox outside the museum. If you e-mail or write ahead, we can be sure to have someone meet you there.

A Short History of Bukovina

Bukovina: From 1775 to 1918, the easternmost crown land of the Austrian Empire; now divided between Romania and Ukraine. As a multi-ethnic province, its name has several spellings: Bukowina or Buchenland in German, Bukowina in Polish, Bucovina in Romanian, and Bukovyna in Ukrainian, all of which mean Land of Beech Trees. The Bukovina Society of the Americas welcomes everyone with interest in the history and culture of this land.

Bukovina, on the eastern slopes of the Carpathian mountains, was once the heart of the Romanian Principality of Moldavia, with the city of Suceava being made its capital in 1388. In the 15th and 16th centuries, the Painted Monasteries of Arbora, Dragomirna, Humor, Moldovita, Putna, Sucevita, and Voronet were constructed under the patronage of Stefan the Great and his son Petru Rares. With their famous exterior frescoes, these monasteries remain some of the greatest cultural treasures of Romania, today.

Along with the rest of Romania, Bukovina fell under the control of the Ottoman Turks. It remained in Turkish control until it was occupied by the Russians, in 1769, then by the Austrians,in 1774. With the Treaty of Constantinople in 1775, control of Bukovina was given to the Austrian Empire. Administered as a district of the province of Galicia between 1786-1849, Bukovina was granted the status of an separate crown land and duchy in 1849. When the Austrian Empire was reorganized into the Dual Monarchy of Austria-Hungary, in the Compromise of 1867, Bukovina, like Galicia, remained under Austrian administration, while the neighboring province of Transylvania was placed under Hungarian rule.

During World War I, Bukovina became a battlefield between Austrian and Russian troops. Although the Russians were finally driven out in 1917, Austria would lose Bukovina with the war, ceding the province to Romania in the Treaty of St. Germain.

On June 28, 1940, northern Bukovina was occupied by troops from the Soviet Union. It would change hands again during the course of World War II, but this half of Bukovina ended back in Soviet hands, and is today the Chernivetska oblast of Ukraine. Southern Bukovina in now part of Suceava county, Romania.

Bukovina covers an area of 10,422 square kilometers. In the 1775 census of this province, its population was only about 60,000. To encourage the development of this sparsely-settled land, the Austrian emperors subsidized the immigration of colonists to Bukovina. After end of these official immigration programs, colonists would continue to arrive at their own expense. As a result, by the census of 1910, the population of Bukovina had risen to over 800,000.

People of many different ethnic groups took part in this immigration, including Armenians, Hungarians, Jews, Poles, Romanians and Ukrainians (at this time, generally referred to as Ruthenians). German colonists came from three distinct areas: Swabians and Palatines, from what is now Baden-Württemberg and Rheinland-Pfalz, in southwest Germany; German Bohemians, from the Bohemian Forest (Böhmerwald), now in the Czech Republic; and Zipsers, from the Zips mountains, now Spis county, Slovakia.

As the population of Bukovina expanded, so did the pressures for emigration. Farmers with large families could no longer divide their homesteads among their children, and industry in Bukovina had never grown to the extent in had elsewhere in the Austrian Empire, or in the New World.

The first wave of Bukovina German emigration began in the 1880's. Most of these emigrants would settle in communities among their Landsleute. These destinations included Ellis, Kansas; Yuma County, Colorado; Lewis County, Washington; Saskatchewan, Canada; and Rio Negro, Brazil. A second wave of emigration to the Americas took place in the years preceding and following World War I. While some joined those who preceded them in the above mentioned locations, others would find industrial employment in New York City.

World War II would provide the major impetus for the Bukovina Germans to leave their homeland. After the Soviet Union annexed northern Bukovina in 1940 -- while the Molotov-Ribbentrop Pact was still in effect -- an agreement between the Soviet Union and Germany, and a similar agreement between Romania and Germany, allowed the ethnic Germans of Bukovina to voluntarily leave for Germany (this agreement obviously did not include the German-speaking Jews of Bukovina, who -- like Jews all across Europe -- would become victims of the Holocaust during the course of the war).

Nearly all the Catholic and Lutheran Bukovina Germans, some 95,000 people, accepted the terms of this resettlement (Umsiedlung) to the Reich. In 1945, many of these, who were sent to German-occupied land in Poland or Czechoslovakia, would find themselves refugees again, fleeing from the advancing Red Army.

The fate of these Bukovina Germans was determined by their location at the end of the war.

Many would settle in West Germany and Austria (with some emigrating to the United States, Canada, and elsewhere), others in East Germany. Some were forced to return to Romania, from where they were finally granted permission to emigrate again to Germany over the following decades. Only a very small minority of Bukovina Germans remain in Romania or Ukraine, today.

Webmaster's note: most of the above discussion concerns the Bukovina Germans; an ethnic minority that was never more than 10% of the population of the province. This is not meant to slight the history and contributions of the many other ethnic groups of Bukovina -- it is only a result of the fact that most members of the Bukovina Society are descendants of this one group, and most of the resources available to the society only discuss this group. We would welcome references to resources regarding the other ethnic groups of Bukovina, particulary those that might be available on the World-Wide Web.

About the Bukovina Society of the Americas

In 1886, the first Bukovina Germans arrived in Ellis, Kansas. They would act as scouts for a larger group that would settle there in 1887. While the descendants of these settlers continue to compose a large percentage of the town's population, over the decades the younger generations would begin to lose their understanding of where this homeland was, and what their ancestors had experienced there. In December of 1988, a committee of interested individuals formed the Bukovina Society of the Americas to promote a respect for and recognition of the history and accomplishments of the immigrants from Bukovina. Many members pursue the research of their genealogy as part of understanding this heritage. A current list of the officers and board of directors is available.

The Bukovina Society Headquarters-Museum, located in the former First Congregational Church building, in Ellis, maintains a collection of artifacts from Bukovina emigrants, along with a small library of books. Microfilm copies of some Bukovina parish registers are held at the Ellis Public Library. An archive of additional material is also located at the Center for Ethnic Studies at Ft. Hays State University, in Hays, Kansas.

Memberships, book and memorabilia orders, and requests for information can be mailed to the Bukovina Society of the Americas.