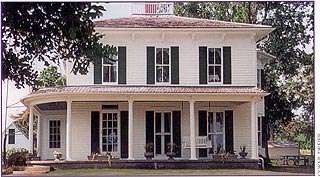 The barn at the Ensor Farmsite and Museum was constructed in 1890 of rough sawed lumber and wooden pegged beams houses displays of various farm hand tools, school shop projects and other items reflecting the diverse interests of the Ensor family.

The architecture of the farmhouse built in 1892 is typical of middle income homes in this part of the country in the 1890s. The contents of the house range from antiques to handcrafted furniture constructed by Marshall Ensor in the 1920s and 1930s depicting styles of earlier times. Antique clothing worn by marshall and Loretta's mother as a child and other articles made by her as an adult are also on display.

The household utensils and appliances span an era of nearly one hundred years. Oil paintings and homemade quilts, also creations of Ida Ensor, give a homey atmosphere to this farmstead.

Marshall, the only son of Jacob and Ida Ensor, lived his entire life on this farm. However, he earned his living as a public school teacher in Olathe. Marshall began teaching industrial arts in 1915 and except for a period during World War II, he taught at Olathe High School until his retirement in 1965.

Marshall and his sister were both very active in amateur radio and operated a ham radio station for fifty years. In 1940, Marshall received the Paley Award. Each year, William S. Paley, the president of CBS radio, would honor one ham radio operator. Ensor became Paley's third and last winner for his efforts in teaching code lessons over his station for ten years, and for helping more than 10,000 listeners become proficient operators. The radio transmitter is still in the farmhouse kitchen as it has been since 1937.

Loretta was the only daughter of Ida and Jacob Ensor and lived in this house for eighty-three of her eighty-seven years. Loretta worked several years at the County Registrar's Office until a serious illness forced her to resign. When polio struck Jacob Ensor, Loretta took over tending the farm.

Loretta has left her farm for those of us who come after, so that we might see how things used to be. Loretta was proud of her family and wants us to appreciate how they worked to enrich their lives and to contribute to their community.

At NASCART indoor racing, you are behind the wheel of high performance karts! Since opening our facility in 2002

The Olathe Community Theatre Association presents six live theatrical productions a season, ranging from progressive, first-run fare to standard classics, including one musical and a children's theater production in June. Our building was established by the Covenant Church in 1870

Things to do Museums near Olathe, KS