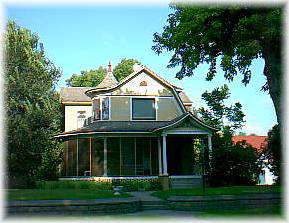 Ernest A. Calling, a pioneer businessman of Gothenburg, hired L.J. Anderson to build this distinctive Queen Anne style home in 1907. Born in Klipp, Sweden, in 1870, Calling emigrated to the United States in 1889. Mr. Calling was successful in local real estate. The house is a well-preserved example of a Queen Anne residence. It illustrates the retention of Queen Anne characteristics in Plains architecture past the turn of the century.

The interior has light-colored Neo-Classical woodwork design, sliding double doors and large leaded glass windows. These combine to give the house a refined and airy spaciousness. The curvilinear aspect dominates the exterior in the curved gambrel roof and the round turret. The brick sidewalk in front of this lovely home is original to the first sidewalks laid in Gothenburg. This home is in the National Register of Historical Places.

Things to do National Register near Gothenburg, NE