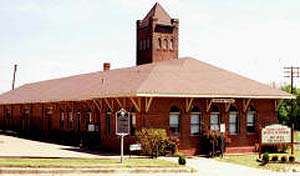 The Yorktown Historical Museum is housed in two historic buildings, both on the National Register of Historic Places. ...