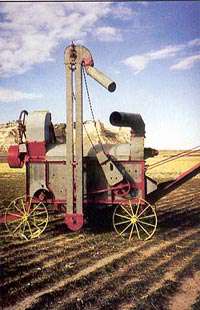 The Farm And Ranch Museum located by Scotts Bluff National Monument is a volunteer driven agricultural museum and the only one of its kind in the state, dedicated to the preservation of the story of the North Platte Valley's deep-seeded agricultural traditions.

You'll be guided through the museum, which is housed on an actual farm, by friendly volunteers who can boast of a wealth of knowledge not only one the exhibits, but agriculture in general, particularly that in the area. Walking through the main gallery, you will see an interpretive photo display of the valley's farming history, from the early settlements to the present, depicting scenes which show how the ag industry has developed and changed over the years.

Also, a working 1/4-scale replica of a 1907 steam engine and threshing machine used to thresh grain sits as one of the centerpieces of the museum. this unit was donated to the museum by a local farmer, and is a favorite among visitors, especially children, who love to see the machine in action. Outside the museum sit many restored pieces of farm equipment, including the first bean cutter to be used in the North Platte Valley, a working 1926 Caterpillar tractor and a 10-bottom John Deere gang plow.

The Farm And Ranch Museum hosts an Annual Harvest Festival Celebration the third weekend of September, where you get a hands-on look at the equipment, from horse-drawn to steam powered to gas powered, watching plows and tills in action on the 110-acre farm.

Whether you are involved in farming and interested in the heritage of the trade, or are looking for a taste of country life, the Farm And Ranch Museum promises to be an educational and entertaining experience for the entire family.


Admission: Free
Hours: Open by chance or appointment October 1 until April 30, Hours: Mon-Sat 10am to 5pm; Sunday from 1pm to 5pm.
Address: 1 mile west of intersections of Highways 92 and 71 on the west side of Gering.
Phone: 308-436-1989
Our Email: farm@bbc.net
Our Website:www.farmandranchmuseum.com/
Call for appointment during off hours and off season.