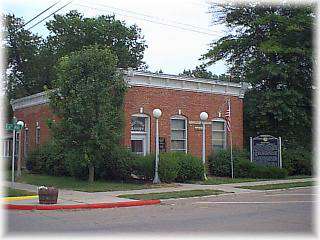 Listed on the National Register of Historic Places, this 1884, one-story brick commercial building which houses the main museum was the general office of the nationally known Fairmont Creamery Company. Founded by Wallace Wheeler and Joseph Rushton, the company became well known in the dairy industry for its quality control and progressive methods of food production and distribution. This building was the organizations office and the creamery was 1/2 miles East of Fairmont.

The creamery's first product was butter, and by 1881, the 100 employees made 7,000 pounds of butter daily. In the 1890s, the company operated plants in Crete, Tobias, Friend, DeWitt, Fairbury, Geneva, Milford, and Hebron. The general offices of the company moved from Fairmont to Omaha in 1907. In the 20th century, the company diversified, processing dairy products, eggs, poultry, vegetables, and snack foods becoming known as Fairmont Foods Company. By 1959, Fairmont Foods was among the country's 500 largest corporations. The company moved its headquarters to Houston in 1974, and in 1980 it became a wholly-owned subsidiary of American Financial Corporation, and later changed its name to Utotem, Inc.

When the creamery moved to Omaha in 1907, Dr. S.F. Ashby purchased the building and converted it to a doctor's office and small hospital. His nephew, and later his son occupied the building. The Ashby family's plan, when they donated the building to the Fillmore County Historical Society, was for it to become a museum.

As part of the Museum, the McClellan Rexall Drug Store is home to a soda fountain from Exeter. Special booths include a hat shop, Anderson's Optometry Office, and the drug store itself.

Come visit us in Fairmont, Nebraska

We currently do not have any events for Fairmont, Nebraska in our database. If you know of events taking place, please add the event
.

Things to do Museums near Fairmont, NE