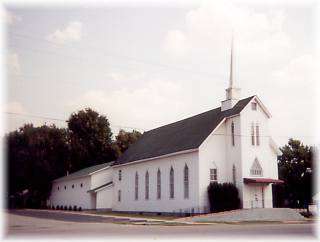 
The Friendship Baptist Church was organized in 1840 at the home of John Jackson, five miles north of Pierce City. During the first business meeting, several members were received and sometime later Brother May was chosen as pastor. However, records indicate he never accepted or served. As the church continued, they apparently selected pastors for a certain period of time. Brother C.C. Riley served as pastor for twelve months, followed by Brother Win. B. Tallaferro's one year of service as pastor.

The winds of war were beginning to blow in America, and the church was soon to be caught up in civil unrest. Battle lines were being drawn by opposing forces over the issue of slavery in the United States. The nation was teetering on the brink of war and the South clashed and the country was awash in bloodshed in the early 1860s. In fact, soldiers used the church house where the members of the Firendship church worshiped during the conflict, providing protection from the elements and giving a sense of safety and fortification.

Eventually, the war ended, the slaves were free, and a battered nation began the reconstruction period in the mid 1860s.

Small communities were springing up in the area and Pierce City, being one of them, was chartered in 1870. Pierce City was a thriving railroad town boasting with shops, hardware stores, general merchandise establishments, livery stables, and of course, places of ill repute. Records are unclear as to the role of the church as the town experienced growing pains.

Church services resumed after the war and were held in the chapel of the Pierce City Baptist College until August 1884. The college was sold for lack of a president in 1905 to the Pierce City School District. The church, at its present location, was built in the late 1800s at a cost of $4500.00, which included two city lots.

The church continued to grow, both in spirit and in numbers. Among the functioning organizations were B.Y.P.U., Ladies Aid Society, Deacon Ministry, and trustees. The church addressed many items with great attention given to detail. Salaries for the pastors were $500.00 to $600.00 per year. The church even voted to contribute $5.00 to help buy oil for Elm Street.

On November 7, 1920, there was $10.00 in the treasury after the bills were paid. The church contacted the state Board for aid to secure and help pay a pastor.

Social concerns came to the forefront in 1929 when some teachers and officers of the Sunday School department were engaging in questionable amusements such as "modern dance and card playing." A resolution prohibiting such activities was adopted and given to all involved. Those who did not adhere to the edict would be asked to give up their church positions.

Notable names in the church history were Tate, Brite, Haddock, Dixon, Goodman, Henson, and Robinson, to name a few.

Mr. and Mrs. C.A. Barnett united with the church in 1936 from the Seneca Baptist Church. Richard Banks, Harold Merritt and C.H. and Jerry Burnett were candidates for baptism one year later.

Bob Hopkins was called as pastor in 1938 at a salary of $20.00 per week and the parsonage at his disposal. Boyd Dodson and Howard Davis told of their call to the ministry in 1948 and the church gave their blessings to the two men.

The church was making an impact in the community as Vacation Bible School and organizations for young men and women were implemented. The Lord was clearly working in the lives of the membership and clergy. Mission groups were flourishing and home and foreign efforts were progressing as people gave of their prayers and support.

A 40 x 70 block building was erected in 1973, during the pastorate of Guy Etter. In order to make way for the new educational unit, the pastoral residence was leveled and a parsonage on East Jefferson was purchased.

An effort was also underway to raise money for a steeple to be placed on the church building. The old steeple and bell tower were removed years ago. The unit arrived and was installed with Vida Cummins expressing her appreciation to all involved in the concerted effort. She continued by saying. "The cross at the top made a statement of our need to look to the Cross of Jesus."

A multipurpose building was erected in 1998 with Dan Boman, Sr. as general contractor. The building provided ample room for various activities. The congregation outgrew the worship area and, in August 1999, moved into the facility.

The Haddock property, south of the church, and the Dacy property three houses east of the church, were purchased in the year 2000. The acquistion of these parcels were deemed necessary for expansion of the present facilities and to provide much needed parking space as well as a possible new worship center. An architect has been obtained to examine all possiblities for future expansions.

The church has seen many young men and women enter the ministry of related fields. Steve and Faith (Vore) Leech are currently serving in the country of Haiti. Beth Grigson is asociated with Wycliffe as the translation of the Word continues. Many others work and serve in the area giving witness to God and His love.

Gregory T. Bunn was called to serve as pastor in 1998 and lead the church in fulfilling the Great Commission until 2005. God is richly blessing the church, the community, and the world through staff members and laity. The current pastor is Mark Wilson.