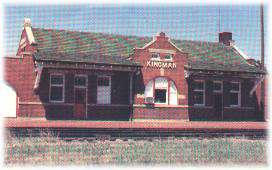 The depot is restored back to its original look as much as possible. The main use of the depot is the Cannonball Welcome Center and a railroad museum. The museum features railroad memorabilia from a private collection, from items found within the depot, and other items that have been donated or loaned. There is also a display of HO gauge model trains. Small meetings, parties, reunions, etc. can be held in and around the building.

History - The former Santa Fe Depot has played an important part of the history of the city of Kingman. Construction of the railroad was begun in 1883 as the Wichita and Western Railroad from Wichita and reached Kingman by October 1884. The line was extended to Pratt by 1887 under the name of Kingman Pratt & Western Railroad. Under foreclosure, the line was purchased by The Atchison, Topeka & Santa Fe Railway in December, 1898.

In January 1994, the line from Wichita to Pratt and from Kingman south and west was sold to OmniTRAX of Denver and became known as Central Kansas Railway. Omnitrax sold the railroad to Watco in 2001, who still operate the railroad today.

The first depot, a wooden structure, was built in 1884. When it was replaced by the present brick depot in 1910, it was used as a freight house until torn down in 1947. Its crowing moment history was in 1900 when a train bearing Theodore Roosevelt made stop beside the depot and the San Juan hero mesmerized the crowd with a speech.

The brick countyseat style depot which still stands at the intersection of Spruce and Sherman Streets was built in 1910 at a cost of $13,480.98. It had both ladies and men's waiting rooms, modern restrooms for each, and a 14 x 14 office for the agent. At the east end was located a baggage room and a freight room. At the west end was an open- air waiting room with concrete benches. Electric lights illuminated the building and steam heat provided warmth with the coal bin located in the basement of the depot. The boiler is still located in the basement but has been converted to gas. It was in working order when it was shut off when some of the heat radiators were disconnected.

Having this depot was important to the progress of Kingman as it indicated a faith that the town was going to grow. Having the court house built in 1908, across the street north helped to further this belief.

The depot is built of No. 1 Coffeyville brick, trimmedwith Bedford stone, and has a green glazed tile roof.

The depot was a center of special activities throughout the years. Agricultural trains stopped to give local farmers an education in farming practices. Special trains brought people from Pratt and Wichita during the annual Cattlemen's Picnic. The high school used the trains to go to sporting events.

Still remembered by many around Kingman was the day that Co. L, 137th Infantry, 35th Division of the Kansas National Guard Troop shipped from the depot in January 1941. They served overseas with many casualties.

Passenger trains brought new residents to this area during the 1880s through the turn of the century. Regular passenger trains operated until the 1930s when it became a mixed train. The last passengers to ride on this line was in 1967.

There is a brick sidewalk, 8 feet wide and bordered by brick curbing, leading from the depot to Main Street. This sidewalk was neglected for several years and nearly buried under dirt and grass. While Santa Fe yet owned the property, two ladies received permission to restore the sidewalk. They spent the summer hauling away wheelbarrow loads of dirt and down on their knees pulling out the grass. When they were finished, the townspeople began to notice the depot itself.

Within a year after Central Kansas took possession, the local citizens received permission to give the depot a cosmetic restoration. Many people spent several hours scraping, repairing, and painting until the building fairly glistened.

Things to do Railroad History near Kingman, KS