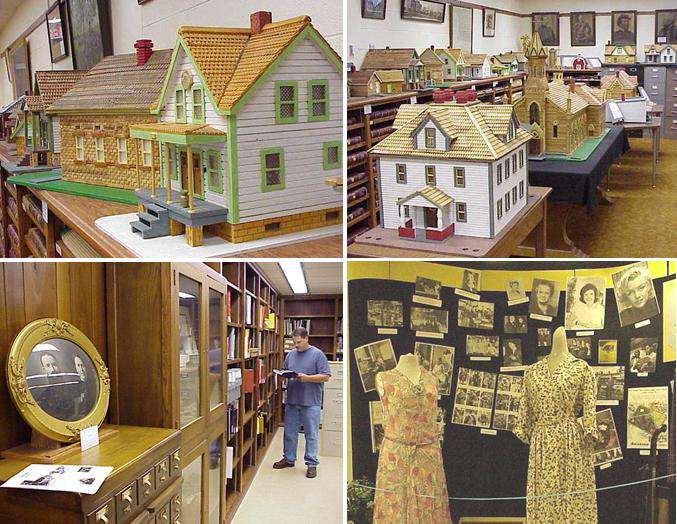 Lawrence Weigel, a noted local folklorist, donated a substantial portion of his personal collection of materials on the Volga Germans to The Center for Ethnic Studies. When combined with the variety of publications from the American Historical Society of Germans from Russia, this collection provides a rich source for research and educational materials for visitors to browse through. There are also a variety of pertinent reference works, bibliographies, pamphlets, journals, newspapers and dissertations published in the United States and abroad. General histories, church histories, parish registers, family histories, diaries and genealogies, obituaries, works on folklore, folk music and art make up the core of the collection. In addition, the collection contains numerous maps, photographs of bridal couples, individuals and groups. Several video documentaries and recordings of folk music and interviews are also available.

The Model Buildings display in the Special Collections Room of Forsyth Library consists of twenty-five buildings and their outbuildings from the town of Catharine. The collection includes St. Catherine Catholic Church, the school, the Sisters Convent and several houses. One of the houses is a replica of the Dorzweiler family home in Katharinenstadt, Russia. St. Andrew Episcopal Church, located north of Hays, is also represented by a model building. The models were built by Ellis County resident Jerome Schmidt, who began working on the first miniature building in 2001. In 2008, after he completed nearly 30 structures, he donated his collection to library. A description and short history for each building is available for viewing.
The model of the Walker Army Airfield that is on display at the Forsyth Library was completed in October 2000 by Fort Hays State University student Steve Arthur. The Walker Army Airfield was located in Ellis County, about 2 and 1/2 miles northwest of Walker. Although the land where the airbase was once located is currently on privately owned property and not open to public access, the road leading west from the town of Walker is a gravel county road that goes past what use to be the main entrance gates. The old abandoned smoke stacks, several remaining hangar buildings and many concrete foundations are visible from the road. The miniature airbase display shows the relationship of locations for several of the hangars, barracks, supply buildings and other structures that would have been located west of the main airbase runways.
The Walker Army Airfield began operations as a satellite field of Smoky Hill Army Air Field located in Salina. Construction on the Walker Airbase began on September 14, 1942 and within two months they had completed enough to allow for limited occupancy and the first military personnel from the Smoky Hill Army Air Field arrived. In February 1943, the airbase was given its own independent mission when the 2nd Air Force organized the 6th Heavy Bombardment Processing Headquarters. Later that year, training of B-29 crews for combat duty began and in August, the first B-29's were brought in for training purposes. The training program of the 17th Bombardment Operational Training Wing continued to be the mission of the airbase until September 30, 1945. With the victory over Japan in August 1945, the number of training stations were decreased and eventually disposition of property became the main activity of the base during 1946. It was transferred to U.S. Army District Engineers on December 19, 1946.
For more information about the Walker Army Airfield and the B-29 Bomber in Kansas, visit this website. www.shptv.org/b29/
Admission: Free Admission
Hours: 8 am to 4:30 pm. Closed on Friday during the summer.
Address: 600 Park - South Campus Drive
Phone: 785-628-5901
Website: http://bigcat.fhsu.edu/future_students/virtual_campus/sites/forsyth.shtml


Admission: FREE
Hours: 8 am to 4:30 pm - Closed on Friday during the summer
Address: 600 Park - South Campus Drive
Phone: 785-628-5901
Our Email: pnichola@fhsu.edu
Our Website:http://bigcat.fhsu.edu/future_students/virtual_cam

(public) This well-maintained course built in 1920, and designed by Dewey Longworth, has excellent bent grass greens. A few trees can alter your shots. Even though there are few sand bunkers, there are water hazards coming into play on a couple of holes. Hole #18, a 155-yard, par 3

Things to do Libraries near Hays, KS