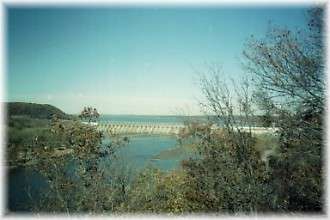 Surrounded by high bluffs, with the expansive lake on one side and rushing river on the other, the massive structure of Fort Gibson Dam is impressive. Observation areas provide excellent views. The dam is located on the Grand (or Neosho) river about five miles northwest of Fort Gibson and about eight miles above the point where the Grand river meets the Arkansas River. The lake lies in Wagoner, Cherokee and Mayes Counties, extending upriver to the Markham Ferry Dam.

Designed and built by the Tulsa District Corps of Engineers, the project was started in 1942, suspended during World War II, and completed in 1953.

Fort Gibson is the downstream unit of a three-lake system for flood control and hydroelectric power. Pensacola Dam on Grand Lake and Markham Ferry Dam on Lake Hudson are the other two units in the system. These three, together with Keystone Lake, Lake Eufaula and Lake Tenkiller store enough water to ensure year-round operation of the McClellan-Kerr Arkansas River Navigational System as well as serve the purposes of low-flow regulation and water supply.

Things to do Landmarks near Fort Gibson, OK