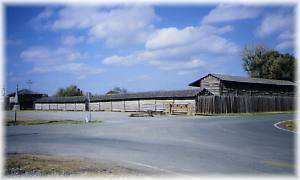 Beginning in the early 1920s, local residents sought to preserve Fort Gibson's History. In 1936, the stockade area was reconstructed by the Federal Emergency Relief Administration, Works Progress Administration, and the Fort Gibson Stockade Commission. Today, the Site is a National Historic Landmark, operated by the Oklahoma Historical Society.

33 sites are mapped for a fort tour aided by uniformed guides that add historical relevance to the specific points of interest. Throughout the year, reenactments, living history celebrations, and work shops fill the entire year with activity at the fort. (See the Calendar of Events for event descriptions).

Some of the sites on the Fort grounds include:

In 1824, increasing tensions between the Cherokee and Osage Nations led the U.S. Army to relocate its westernmost presence from Fort Smith, Arkansas to a point farther west in the Arkansas territory. Colonel William Arbuckle selected a spot on the Grand River, three miles upstream form the convergence of the Arkansas, Grand and Verdigris Rivers.

Colonel Arbuckle oversaw the construction of a wooden stockade named Cantonment Gibson in honor of General George Gibson. The stability of the stockade encouraged both Euro and Native Americans to settle near the post giving rise to the community at Fort Gibson, the oldest in the state of Oklahoma.

The Seventh Infantry arrived at the post in 1831, and in 1832, Cantonment Gibson was renamed Fort Gibson. Soldiers at the fort were instrumental in overseeing the resettlement of the eastern tribes to Indian Territory. For many, Fort Gibson was the terminus of Native Americans and their African-American slaves after their removal from the southeast part of the nation, commonly known as the Trail of Tears.

In 1857, The Army withdrew from Fort Gibson and transferred the land and the buildings to the Cherokee Nation. During the Civil War the Confederate soldiers briefly occupied the site before establishing Fort Davis nearby. Fort Gibson was reactivated in 1863 and occupied by federal troops as a key point in controlling Indian Territory and the Texas Road. The U.S. 10th Cavalry, a unit of black soldiers nicknamed "Buffalo Soldiers," was stationed here after the Civil War. Fort Gibson also was the home of the first black regiment in Indian Territory, the 1st Kansas Colored Volunteers Infantry.

The Army served at the fort until 1871 when most troops were reassigned and the fort designated a commissary supply post. In 1872, following the arrival of the railroad to Indian Territory, the fort was reactivated to ensure law and order. In 1890, the Army abandoned Fort Gibson permanently.

DIRECTIONS: Fort Gibson Historic Site is located on Garrison Avenue between Hazen and Coppinger streets in Fort Gibson. The Stockade complex is located at the intersection of Lee and Ash. It can be reached from U.S. 62 by turning north on Hwy 80 (Lee St) and following it through the Town of Fort Gibson.

Most park facilities are accessible to persons with mobility challenges. If you require assistance, please notify park staff.

Parking is available, including parking for buses, in the site's parking lot.

Things to do Forts near Fort Gibson, OK