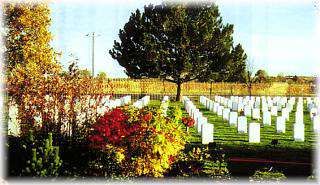 Established on September 27, 1863, Fort MCPherson provides protection for traders and trappers in their search for furs, settlers in their quest for land and freedom, miners seeking the riches of the Rocky Mountains, and the first transcontinental railroad linking the East and West Coast. As the settlement of the area progressed, the need for the soldiers decreased and Fort McPherson took on a new role of importance in the area.


The memorial section, located near the main entrance, contains memorial markers to commemorate those members of the Armed Forces who had died in service and whose remains could not be recovered, identified, buried at sea, or had their ashes scattered.


Over the years, this small piece of Nebraska has become the final resting place for four recipients of the Medal of Honor, two of which are Buffalo Soldiers. The Medal of Honor is earned by a deed of personal bravery and self-sacrifice, above and beyond the call of duty.

Things to do Cemeteries near North Platte, NE