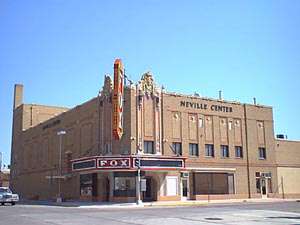 The Fox Theater is a fine example of the "Picture Palace," a building type popular in America in the 1920s. A product of Eclecticism, the theater incorporates decorative features from various architectural styles, including Egyptian, Georgian, Moorish, and Roman. Keith Neville and Alex Beck of the North Platte Realty Company financed and erected the theater in 1929. Neville, governor of Nebraska 1917-19, also financed construction of the Hotel Yancey located across the street from the Fox Theater. Both buildings were designed by Omaha architect Frederick A. Henninger. The Fox Theater opened on November 24, 1929. Listed on the National Register of Historic Places, it is named for William Fox, a pioneer in the movie industry.