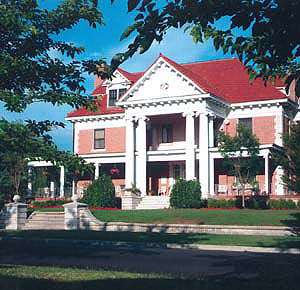 In 1897, the frontier trading community of Bartlesville in Indian Territory became the site of the first commercial oil well in Oklahoma. During the decade that followed, oil entrepreneurs streamed into the area and exploration exploded in a frenzy of spectacular successes and failures. The discovery of oil and increasing settlement led to statehood in 1907. This same year, Oklahoma became the nation's leading producer of oil, a position it continued to occupy or share through the tumultuous years of growth that followed.

Frank Phillips, an ambitious barber-turned-bond salesman from Iowa, visited Bartlesville in 1903 to assess business possibilities in the surrounding oil fields. He returned permanently two years later with his wife Jane and young son John. After a series of failures that nearly caused him to abandon the business, a string of eighty-one straight successful oil wells insured success. By 1909, he had completed construction of the Frank Phillips Home. From then until Frank's death in 1950, the home was the setting from which he, his family and friends, and the community that grew up around them played a key role in the development of the oil industry in America.

The original 26 room Neo-Classical mansion was remodeled twice. It underwent extensive interior redecoration the last time in 1930. It nonetheless retains the graceful external lines of the original design. Thereafter, neither the Phillips nor their granddaughter who donated the home to the Oklahoma Historical Society in 1973, made significant changes to the interior. Thus, with few exceptions, the furniture, decorations and even personal effects are original.

As a consequence, the Home depicts the lives, tastes, fashions, and values of the Phillips and their world during the first half of the 20th century. As an example of the personal home of an Oklahoma oil millionaire, it is a window through which you can step back to those times, and experience the home life of one of America's most fascinating oil men.

On the ground floor, your tour will include the spacious, richly paneled library, and the dining room where much of the entertaining was done. Here, and at their country lodge at Woolaroc south of Bartlesville, the Phillips received guests from near and far: personal friends, American and foreign businessmen, local ranchers and cowboys, and Native Americans with whom Frank felt a particular closeness. Frank was proud to have been adopted into the Osage tribe, and to wear their ceremonial attire. On the second floor are Frank and Jane's distinctly different bedrooms and private baths, Jane's with gold fixtures and ceiling mirrors, and Frank's with his personal barbers chair. Also on the second floor is the bedroom of their beloved foster daughters, with its display of childhood animal friends and toys.

An expanded panorama of Frank and Jane's lives and interests is presented in the award-winning permanent exhibit in the garage behind the home. Included is information on the humble beginnings, family life, the oil business, Phillips Petroleum Company, and the many philanthropic endeavors with which they associated themselves throughout their lives

A stroll around the grounds as you leave, will reveal how graciously this elegant home still fits, nearly a century later, within the town setting it did so much to create.

The Director's Tour: This tour runs at 9:00 a.m. on Wed, Thurs, Fri. A special "behind the scenes" tour that includes the basement used by the Phillips family as a laundry area, and other areas that the normal tour does not cover. Allow 1 1/2 hours for this tour which ends in the estate's garden cottage with refreshments. Admission for this tour is $10 for adults, $7 for children.

Come visit us in Bartlesville, Oklahoma

Circa 1956, The 19-story glass and copper skyscraper by Frank Lloyd Wright. The design is based on a diamond module of 30 and 60 degree triangles.

Things to do Famous Homes near Bartlesville, OK