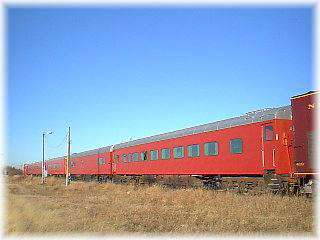 Come relive a portion of our history aboard the FEVR, Nebraska's longest and largest tourist railroad, in rail cars dating from the 1920s. Beginning life as the Fremont Elkhorn and Missouri Valley Railroad, its trains were the first to reach into the Black Hills. A westward extension of the line terminated near Yellowstone Park in western Wyoming and nearly became a transcontinental routing following a merger with the Chicago and Northwestern Railway in 1903. The track the cars ride upon was laid in 1869. You'll cross a historic Indian Road, the route of Major Stephen Long's 1820s western military expedition and the 1840s Mormon Trail. Includes vintage 1920s through 1940s railroad equipment with entertainment on board.

Caboose available for groups and birthday parties (Holds 20 people). Must call 2 weeks in advance for reservations. Entire cars on the FEVR can be rented for private parties with a choice of destinations to Hooper or Nickerson. Special group rates are available.

The FEVR depot is also the museum. Fremont railroad history is preserved here. Collections include railroad memorabilia, scale model trains and other items.

The railroad and museum are owned and operated by the Eastern Nebraska Chapter of the National Rail Historical Society -- a nonprofit rail preservation organization.

Come visit us in Fremont, Nebraska

Things to do Excursions near Fremont, NE