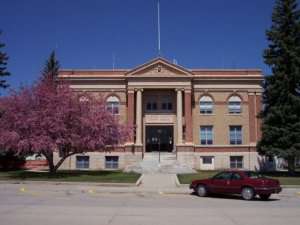 In an election held in 1909, Deuel County voters approved the creation of Garden County and the older county lost three-fourths of its territory. Oshkosh was established in 1889, but not platted until 1905. In 1909, citizens voted to form Garden County, chosing the title as "garden spot of the west," and elected Oshkosh its county seat.

"The commissioners rented the lower floor of the Commercial Hotel in Oshkosh for a courthouse, hired Mr. Day to transcribe the records from Deuel county; built a temporary jail and a cement vault for the records, and early in 1910 Oshkosh got settled down to the duties and responsibilities as county seat of the new county." "In the spring of 1914, the county commissioners called a special election to submit to the voters the question of issuing courthouse bonds in the sum of forty thousand dollars ($40,OOO). The measure failed to carry and the county was still renting the old cramped, unsuitable building for a courthouse."

On December 12, 1918, land on Main Street and Avenue F was deeded to Garden County for a court house, from the August Sudman Company for $1.00.

After the approval of a bond issue in 1921 construction began on the courthouse. The following year the Classical Revival-style building was completed.

We currently do not have any events for Oshkosh, Nebraska in our database. If you know of events taking place, please add the event
.

Things to do Historic Courthouses near Oshkosh, NE