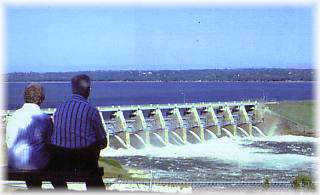 Water released from the five upstream dams is used at Gavins Point Dam for production of hydroelectric power. The Gavins Point Dam generators provide enough electricity to meet the annual needs of 65,000 people. Controlled releases from the dam enhance navigation and minimize erosion on the Missouri River to St. Louis, Missouri. Gavins Point Dam, along with Lewis and Clark Lake, provide $35 million in benefits to the public annually. These benefits include power generation, flood control, recreation, navigation support, and fish and wildlife enhancement.