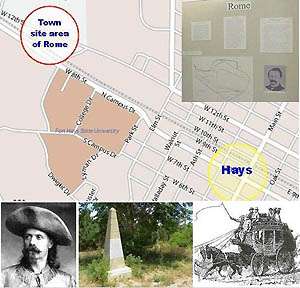 The short lived town of Rome was established in May of 1867, which was approximately 3-4 months prior to founding of Hays City. The details surrounding the rise and fall of this small town are not clear. The first inhabitants of Rome appear to have been the Lull brothers from Salina, Kansas. Whether they were the town founders, emissaries of the founders, or simply the first businessmen remains a question. Also unclear is the roll William Cody played in the town's history. Some accounts credit Cody and his partner, William Rose, with the founding of Rome. Cody as a scout for the Army and Rose as a railroad contractor may have had information that could have led them to choose the site as a good location for a town, as neither the railroad nor the Fort were in the area when Rome was first settled. It was in June 1867, that Fort Fletcher, which was located approximately 15 miles east and south of present day Hays, was relocated (and renamed) to the current site of Fort Hays.

Simon Motz, an early citizen of Rome, who then became the first Hays mayor, arrived in Rome in June 1867. At that time, records tell of a two story hotel being built by Joe Perry, a 4 room house and a large stone business under construction by Cody and Rose. A week later, according to Motz, Rome had a population of 500 and his description of Rome as a "tent city" indicated that most of the businesses were probably canvas structures. When the Butterfield Stage Line opened a station in the Perry House, the future of Rome seemed good, but cholera hit that summer and decisions made by the railroad did not help the fledgling town. W.C. Webb, who apparently had the authority to locate depots for the Union Pacific Railroad Eastern Division, began selling town site lots east of Big Creek. This rival town company of Webb and a man named Phinney Moore, had wanted to be made partners with Cody at the Rome town site, but when Cody refused, they encouraged the development of a new town approximately a mile east of Rome. By July of 1867, Rome had over 2,000 citizens and continued to grow until August when the town of Hays City was established. By the time the railroad arrived in October, many of the businesses of Rome had already relocated to Hays City or farther west along the railroad. The last businesses moved out of Rome in the spring of 1868. Visitors to this location will see the stone marker on the western outskirts of Hays that shows the approximate location of the Rome town site. There is a bronze historical marker that provides a information about Rome, and nearby is the railroad bridge crossing Big Creek that was once known as "Hangman's Bridge", the site of several hangings in the early days of Hays City. Those who care to explore the area around Big Creek and the Rome location will find hiking trails that cross beneath the 12th Street Bridge and south through the Fort Hays State University Campus.

Things to do Ghost Towns near Hays, KS