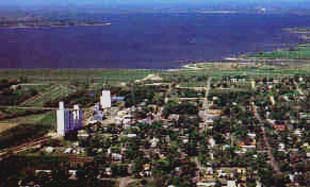 When the Civil War ended and the government opened up for settlement the territory now known as Kansas, a whole new way of life on the plains was about to begin. The wide open prairies were Indian territory. Waconda Springs, located three and a half miles west of Glen Elder, was a special place of worship for several tribes. Buffalo roamed the land by the thousands, along with deer, antelope and other wildlife. The Indians soon were forced to move further north, giving up their land to the newly forming white settlement. Reportedly the earliest pioneer, Mr. Smith or Mr. Decker, arrived in 1866, made a dugout on Limestone Creek by the present Porter home place, but did not stay. The first known settlers were the Truman and Emetine Allen family in May 1869. They first occupied the earlier dugout, but later moved on up the creek.

George Stinson then homesteaded the land the Allen's had vacated. He started the Kansas Bitter Saloon which was soon surrounded with a stockade as protection against the Indians and was located east across the creek from their dugout. He also started the Log Cabin Home, reported to be the first hotel in Mitchell County. When today's residents, Max and Phyllis Porter built their new home, while digging for the basement, an old rock sign with crudely carved lettering "Glen Elder Log Cabin Home 1870" was uncovered in two parts. The Porters had the sign cemented back together, and it now sits in their yard. It is believed to be the only artifact from the original town of Glen Elder.

George Stinson is credited with naming this early settlement Glen Elder. National Archive Postal Records show Stinson was appointed the first Glen Elder postmaster on July 5, 1870, and he was also the first justice of the peace.

Homesteaders in 1871 started a sawmill on the Solomon River near the bluffs, on the south edge of present Glen Elder, and others platted a town site on the present Glen Elder business district. A petition was submitted to the court on December 25, 1872, to have this town named West Hampton.

By now settlers were arriving almost daily, taking homesteads, working farms, and starting new businesses. The railroad came through in 1879 and by now it was time for the settlers of both the north and south locations to merge into one town. Several versions have been told of how the present name of Glen Elder was chosen, however, the most commonly reported was the postal department, wanting to be nearer the new railroad line and not wishing to change their name, played a major role in keeping the name of Glen Elder.

Glen Elder was incorporated on November 28, 1879, and registered as a city of the third class, the city limits superseding all of West Hampton.

To Glen Elder calendar of events

Things to do near Glen Elder, KS