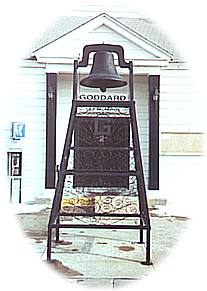 As was common in the formation of many towns in the mid 1800's, Goddard developed from a blend of neighboring post office establishments into one locale for a greater chance at prosperity. Attica Township in Sedgwick county was established by 1873. Most of the early settlers came to the area from the Eastern states and some from European countries. In order to provide education for their children, they built a school house in 1875 and named it Attica. It also served as a community building and church.

During this time a small settlement developed 10 miles west of Wichita, called Ten-Mile-Post, and later Ten-Mile-Corner, then later again, as Blendon. At the same time another town was trying to develop southwest of Goddard. A little creek reminded the land owner's wife, Mary Lyman, of her favorite song, "Flow Gently Sweet Afton." They named the creek and town Afton. After Goddard became a town in 1883, the Blendon and Afton post offices combined with Goddard and the two-story town hall in Blendon was moved to Goddard.

Up to a few years ago, the Goddard Alarm Bell, now located in front of the senior center, used to be in the middle of main street to alarm volunteers of a fire.

Goddard's small town atmosphere is an attraction to visitors and residents alike who choose the quiet, personal touch with the availability of big town services in nearby Wichita, only 15 minutes away.

Goddard Welcomes you to the fastest growing area in Kansas and is proud to be accredited with the number one school system in the state!

See the moon, planets, stars and galaxies through a 16-inch telescope. There are also, astronomy-related exhibits. Monthly programs are scheduled with instructional guidance to observe stellar occurances at the moment. 316

To Goddard calendar of events

Things to do near Goddard, KS

A newly completed interpertive trail about 1/2 mile in length, called the Spring Creek Nature Trail, is a trail that t...