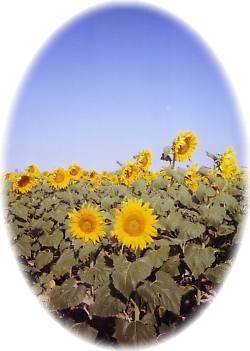 Following a mild county seat "war" the new city of Goodland won the honor following the election in November, 1887, but the town of Eutis, unhappy over the election results, refused to relinquish the records. In January of 1888, an armed party from Goodland marched to Eutis and forcibly removed and relocated the records in Goodland's brand new Court House. Not a shot was fired, feelings were hurt, and Eutis as a city was doomed.

There are various tales of how Goodland received its name. The one most published gave credit to A.B. Montgomery, the resident land agent for the company that developed the city. Mr. Montgomery was a native of Goodland, Indiana, and stated that he believed the land here was as good as that of his home state, and dubbed the new city, Goodland, Kansas.

The first train arrived in Goodland on July 4, 1888, the day the Rock Island Railroad gave the city its start as a Tri-State Trade Center, the status it maintains today.

Located at the junction of Interstate 70 and K-27 the city is large enough to offer many assets to all ages, yet small enough to raise a family in an environment rich in old fashioned values.

Welcome to Sugar Hills Golf Club. Enjoy the beautiful rolling hills with blue grass fairways and challenging greens. For tee times, cart rentals or any other information, contact the Club Manager at

To Goodland calendar of events

Things to do near Goodland, KS