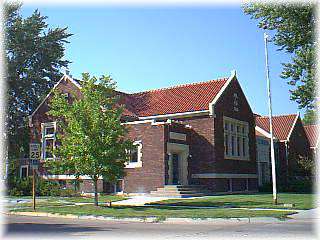 The library was built in 1916 with assistance from a $7,000 grant from the Carnegie Foundation. Designed by local architect Moses N. Bair, the building is architecturally unique due to its ell-shaped plan and Jacobethan Revival detailing. Other libraries in Nebraska follow the rectangular plan and Neo-Classical Revival detailing established by the Carnegie Corporation.

In 1986, the library was listed on the National Register of Historic Places. It first opened with 1500 books and a monthly budget of $40 for the librarian and janitor and $10 for purchasing new books. Today the library collection has 23,000 titles with over 2,000 registered patrons. It has cemetery records and microfilm of back issues of the local paper available to history enthusiasts. A 6,000 square foot addition and renovation to the original building began in February, 1998. The $1.2 million construction project was completed in 1999. The architecture of the addition carries on the unique features of the original building. The new library addition houses the adult library which includes a technology room, offices, study rooms and a reading area with fireplace. The original building has been converted to a community meeting room and the children's library.

Things to do Carnegie Libraries near Gothenburg, NE