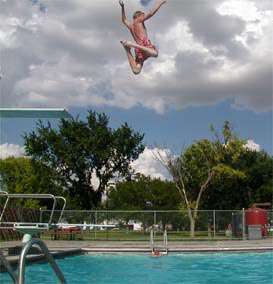 Kimball's two parks offer just about everything that you could want in a city park.

Gotte Park, location of the Titan I Missile, houses the municipal swimming pool, basketball and sand volleyball courts, tennis courts, shady trees, a picnic shelter, overnight camping, and playground equipment. A tennis court is also used for roller blading, ice hockey, and ice skating. Next to the swimming pool there are soccer goals for the soccer enthusiast. There is ample room for kite flying, frisbee throwing, horseshoe tossing, or just tossing a baseball around. Be sure and pack a lunch!

City Park has playground equipment, picnic tables, a picnic shelter, a basketball court, and lots of room to roam. It is located at 4th and Walnut Streets.

Things to do Recreation near Kimball, NE