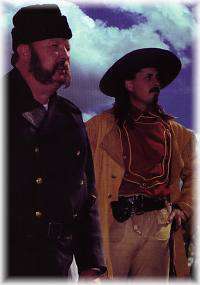 Son of Russian Czar, Alexander II, the Grand Duke Alexis visited Nebraska in 1872 for a buffalo hunt led by Buffalo Bill Cody, General George Custer, and General Phil Sheridan. Months were spent preparing for the event, and the U.S. Army made it quite the occasion with luxurious accommodations that would have been rare for the prairie. Twenty-five wagon loads of provisions were hauled to the site, five of which carried the Duke's tents stoves, bedding, chairs, tables, and carpets.

The hunt was held in Southwest Nebraska just northeast of Hayes Center where Native American Sioux had spotted a herd for the hunting party. Buffalo Bill had arranged for Chief Spotted Tail to bring 100 of his best warriors to the event where they demonstrated the Sioux way of hunting with bow and arrow. The tribe also performed their famous war dance nightly to entertain the Grand Duke and his party.

Today the celebration continues during the Grand Duke Alexis Rendezvous held at the actual site of the famous historical buffalo hunt. Young and old alike are invited to enjoy the 140 acre area of Camp Hayes Lake year round or attend the rendezvous held in the fall for a genuine prairie experience while reliving the old west.

Feel the Spirit of the old west come alive as you stop onto the historic campground of Buffalo Bill Cody, General George Custer and the Grand Duke Alexis while immersing yourself in the fabulous storytelling of the Last Great Buffalo Hunt with featured storytellers who portray these main characters and their exciting tales.

Relive the history by throwing on your buckskins, setting up your lodge or tent for several nights or bringing along our black powder to sign up for the Post Shoot, Buff Shoot, Coffee Pot Shoot, Blanket Shoot, Dice Shoot, and Couples Shoot. From throwing Tomahawks to shooting black powder rifles having tea on the prairie to listening to tales of the old west you're in for three fun-filled days during the Grand Duke Alexis Rendezvous!

Plenty of food and refreshments will be available on location, and shuttles will be running daily between the parking area and the campsite.

Come and feel the spirit of the old west as it rolls across the Plains carrying you back to the days of the buffalo hunts, the prairie pioneers and the Native American Tribes during the Annual Grand Duke Alexis Rendezvous. It will be a historical experience with nature that you will never forget!