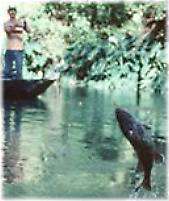 Grand Lake O' the Cherokees boasts over 30 full service marinas and boat dealers. You can enjoy everything from a comfortable, friendly fishing camp style marina to luxurious yacht clubs with every service imaginable.

Above Natural Falls State Park natural springwaters flow into a common stream, creating a cascading 77 foot waterfall. At the...