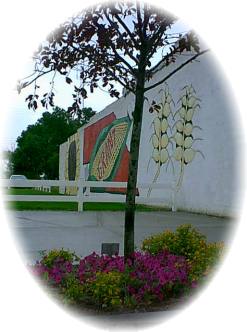 The town of Grant has grown into a busy little city with many notable features that include a youthful business community, outstanding medical facilities, a modern hospital, and four doctors. We have a good school system with top-notch sports and music programs. Grant has churches of many denominations, a pleasant city park with a heated swimming pool, tennis courts, band shell, and picnic area. Grant has a lively historical society-museum which includes a turn-of-the-century home, a 1900-era school, and a large display building.

When Grant was platted in 1886, the founding fathers missed the path the railroad would take by half a mile. Consequently the entire town was loaded on skids or wheels and moved down the road in order to relocate beside the tracks. Named for Ulysses S. Grant, the city moved swiftly to organize the county government, and new businesses such as banks, and restaurants were soon doing well.

By 1889 a teacher\'s institute was hosted by Grant educators with lectures, a study of new text books, and examinations for those who planned to become teachers. Soon Grant had two banks, other shops and businesses, and a newspaper called \"Wooly West.\"

Ranchers, running large herds of cattle or sheep, found this area to their liking. Some ranches were just a few thousand acres, others as large as 40,000 acres.

Today the area near Grant is covered with \"irrigation circles\" in the hopes that increased yields will spell prosperity.

Downtown, the Perkins County Senior Center is a busy place where a good hot meal, quilting, card parties, and pool tables draw folks from all over the county. Senior transportation is provided by the mini-bus. Comfortable low-rent housing is also available. Real estate people are kept busy with folks moving into town from all over the country. Many are coming home for their retirement years.

To Grant calendar of events

Things to do near Grant, NE