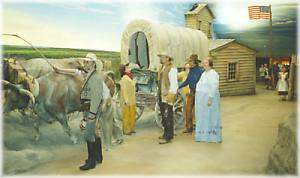 The only U.S. attraction to span an interstate highway, the Great Platte River Road Archway Monument is a fantastic link to the past. Its eight stories span a distance where trappers, pioneers, the 49ers, and the Pony Express once passed through. You will see the trials and triumphs of their story as told through huge murals, interactive displays, lighting, and narration.

Realistic exhibits allow you to sense history not only by sight but you can also hear a lightning storm over Fort Kearny, a buffalo stampede, the rumble of the Iron Horse, and a Drive-In Theater. Selected as one of the outstanding new attractions of the year 2001 by the international Themed Entertainment Association, the archway which opened June 9, 2000, was host to more than 300,000 visitors in its first year.

Here is the story of the westward migration along today's busiest transcontinental interstate highway. Visitors will learn of the thousands of pioneers who have gone before them seeking land, riches or religious freedom, or on a quest for self-discovery.

When you enter the spacious log-and-stone lobby, you see people riding up an escalator and seemingly disappearing into an enormous animated painting of covered wagons moving West. Pioneers and wagon trains move forward toward the trail.

The first stop on the first level of the museum that makes history come alive is Fort Kearny. Through your headphones, you can hear the first person voices of early travelers as they guide you along the way. As you leave this last frontier outpost and head out on the prairie, notice American Indian encampments and covered wagons being pulled by straining oxen. You feel a storm rolling in as thunder rolls above and lightning flashes. Chimney Rock in the western Nebraska Panhandle beckons.

Turning a bend, the wind blows the prairie grasses, and a different, distant thunder grows louder. Suddenly, you find yourself in the midst of buffalo stampede. Ahead is a Mormon handcart expedition which started out late from Omaha and is caught in an early fall snowstorm at the Sweetwater River. A rescue is in progress, but not all will survive.

Nearby, '49ers are encamped at a campfire, dreaming of riches, carefree now, unaware of their future. As you move further west in the immersive exhibitory, the pioneers' losses mount, their treasured possessions thrown off the wagons to improve their chances of getting to where they are going. But there are graves. Too many graves. One in 17 won't make it. But you do.

The Trail Blaze Maze is a good activity to take in before getting back on the road. The Archway also has a grand lobby in which you are greeted by reenactors. The Chuck Wagon Restraunt serves a noon meal of melt in your mouth bar-b-que, and the gift shop offers items of interest for all ages.