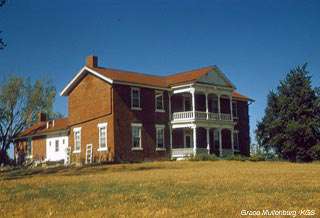 The first permanent white settler in Wyandotte County was Moses Grinter. He built Grinter House in 1857 which is now a National Historical Site which overlooks the Kansas River.

Troops traveling between Forts Leavenworth and Scott sometimes crossed the Kansas River on a ferry operated by Grinter. A native of Kentucky, Grinter married Annie Marshall, a Delaware Indian whose people had been relocated to the Fort Leavenworth Indian Agency in the early 1830s. Moses and Annie Grinter's later home, a two-story brick I-house built before 1862, is preserved today as the oldest home in Wyandotte County.

From 1855 to 1860 Moses Grinter operated a trading post, a business that sold about one hundred sixty types of goods (clothing, powder and bullets, perfume, sugar, and scissors, among other things) to the Delawares in exchange for cash and furs. The Grinters also farmed, raised poultry and livestock, and planted an apple orchard on their farmstead. During the Civil War one of their sons served in the Fifteenth Kansas Calvary.

Moses Grinter died in 1878, and upon the death of Annie in 1905 their son-in-law and daughter, Reverend Henry C. and Martha V. Grinter Kirby, moved into the residence. Henry and Martha's daughter sold the residence and land in 1950 to a family who owned and operated a chicken-dinner restaurant on the site until the mid-1960s. Through the assistance of the Junior League of KCK and the Grinter Place Friends, the State of Kansas acquired the site in 1971 and now administers the former Grinter residence as a state historic site.

For more than 50 years, Memorial Hall has been the cornerstone of Kansas City entertainment. This 3,300

Near the heart of the city, this statue pays tribute to John Brown, one of the nation's early-day opponents of slavery.

Kansas Speedway the track that will blow you away is a 1.5

Things to do Museums near Kansas City, KS