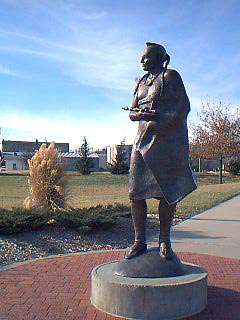 This statue honors the Native American Kaw or Kansa Tribe. Together with the Madonna of the Trail, these two statues symbolize the true story of the West. This bronze statue was created by Council Grove artist Mark Sampsel and was authrorized by Kaw Nation of Oklahoma.

Address: Guardian of the Grove Statue

This 300-year-old bur oak (just the trunk remains) served as the unofficial post office for travelers on the Santa Fe Trail from 1825-1847. Passing caravans could leave messages for future travelers in a cache in the base of the tree. A stone building erected in 1864

Things to do Arts near Council Grove, KS

Passengers on the northbound Santa Fe out of Arkansas City, Kansas, seeing for the first time the huge stone letters on the h...