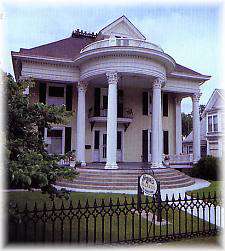 
The house was constructed by Henry Falldorf in 1905 for Ellsworth D. Hamilton, cashier of the Commercial State Bank of Grand Island. In 1908, Hamilton sold the property to John Donald, one of the two brothers who established the Donald Company. The house is an outstanding example of the Neo-Classical Revival style and incorporates a full height portico in its design.