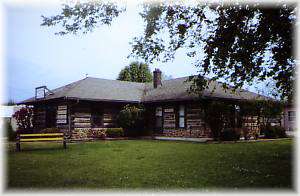 The Haskell County Museum displays historical facts in the American Legion Hut, built in 1921, and located on the northeast corner of the courthouse square. Sam Harrell, a World War I Veteran, hauled the logs from the Perry area to a sawmill in Stigler and had them cut on three sides. George W. Scott owned the land and donated the logs. Joe Votaw was the head carpenter and Frank Delaney assisted him. volunteers did all the work.

On November 11, 1921, the American Legion hut was dedicated. There was an Armistice Day Parade, music and public speakers.

For over 60 years, the American Legion Hut was truly a community center. In addition to meeting the needs of the American Legion, the building was a favorite meeting place for the whole community. The young and old met there for social meetings, political meetings, dances, plays, wrestling matches, boxing matches, and parties. Today, its community service continues as the center for the Stigler Chamber of Commerce.


Come visit us in Stigler, Oklahoma

To Stigler calendar of events

Things to do Museums near Stigler, OK

Early day mining exhibits are displayed in a 1901 coal mining house with furnishings and mining history artifacts dating from...

The museum houses a private collection of artifacts from across the United States....