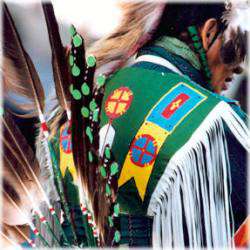 Haskell Indian Nations University (HINU) first opened its doors in 1884 as the United States Indian Industrial Training School. In 1890, the name of the school officially changed to Haskell Institute in honor of Dudley C. Haskell, the congressman instrumental in having the school built in Lawrence. The school expanded to include secondary curriculum by the end of ten years. Less than 30 years later the institution focused on senior high programming and in 1970 the institution received accreditation as a junior college.

Haskell's 320-acre campus is a national landmark and contains 12 sites listed in the National Register of Historic Landmarks making Haskell a fascinating piece of Lawrence history to behold. Sites of interest on the campus include the American Indian Athletic Hall of Fame located in Stidham Union, Haskell Memorial Stadium/Arch, the Medicine Wheel Totem Pole, Medicine Wheel Earth Work, and the Haskell Cultural Center. For a self-guided tour of historic HINU, stop by the Lawrence Visitor Information Center at North Second Street and Locust, just north of downtown across the Kansas River.

Haskell Indian Nations University is one of the oldest and most recognized American Indian/Alaska Native Universities in the United States. Founded in 1884 as the U.S. Industrial Training School, in Lawrence, Kansas, Haskell was originally established to assimilate Native American children into mainstream America. The United States wanted to solve the "Indian problem" and they viewed education as the fastest and most complete means of achieving that end. It was felt that removing Indian children from their families and communities would remove the influences preventing the American Indian from becoming productive and acceptable members of the dominant society. Haskell began with fifteen students brought to Lawrence from across the country. They ranged in grades first through the fifth. By 1884, there were 606 students enrolled representing 36 states.