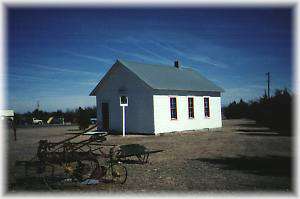 The Hillmon Schoolhouse was the sixth school district to be organized in Norton County. The school houses were numbered as they were built and the Hillmon School was District 6 in Crystal Township. A family by the name of Hillmon was active in getting the school established. Mr. and Mrs. Dick Hillmon came to Norton County in 1874, and took land two miles west of the small town of Devizes.

The original structure was a combination of log and dugout, and was located in the northwest part of Norton County overlooking the Sappa Valley, 1 1/2 miles south of the Kansas-Nebraska State Line. The school had two windows with a door at the back of the building. The desks were made of slabs of wood with pegs for support.

In 1886, the current building was erected just one-half mile south of the original structure on land donated by David Fawcett. The schoolhouse was a community center and used for church services, funerals, weddings, and many other school activities. In 1967, the one-room school was accepted by the Norton City Council from the Hillmon-Devizes Community. The building was moved to its present location at the Prairie Dog State Park, and in September, 1969, the schoolhouse was officially dedicated as a tourist attraction.

Things to do Pioneer History near Norton, KS