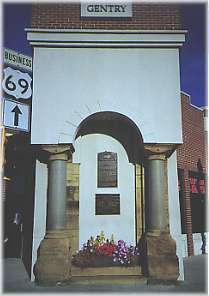 Downtown Checotah is one of only 15 National Register Historic Districts in Oklahoma. Built between 1898 and 1903, many of the buildings still show the grandeur of their original architecture.

Unfortunately, in 1992 the loss by fire of Checotah's prestigious Gentry Block was devastating to the community. The original commercial anchor was a key segment of the Historic District as its stores offered beauty and variety to a pioneer town and a real touch of elegance. However, thanks to a very dedicated community, the block has been rebuilt to accommodate offices and retail businesses.

At the main street corner of the Gentry Block stands the original columns of the bank building shrouding a memorial plaque to the history of the district.

Things to do Historic Districts near Checotah, OK