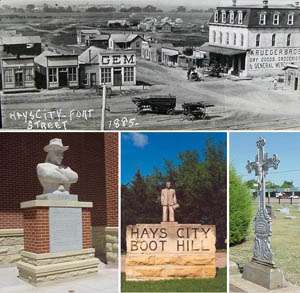 A self-guided driving tour to over 30 locations throughout the community provides the opportunity to see some of the most important landmarks, historic sites and points of interest in Hays.

The tour begins at 27th & Vine, across from the Hays Welcome Center. Drive past Mount Allen Cemetery or enter from the south and see the only cemetery in Kansas to have two old fashioned tree swings with wooden seats.
The land for the Mount Allen Cemetery was provided by Martin Allen, an early resident and businessman of Hays City. Mr. Allen's daughter Clara, died in February of 1874 and he did not want her to be buried in the cemetery located just north of Hays City (now known as Boot Hill) where the "roughs", criminals and other desperados where buried. Clara Martin and many of the early residents that died in Hays City are buried in the northeast corner of the block, which is the oldest part of the cemetery.

Boot Hill Cemetery - Site of the first cemetery in Kansas to be called "Boot Hill". Many of the outlaws were buried here from 1867 to 1874 and later moved to the Mount Allen Cemetery.

Kennedy Middle School - Named after Senator John F. Kennedy who visited Hays on Nov. 20, 1959 during his successful presidential campaign. At the time of Senator Kennedy's visit, the school was still called Jefferson West. It was later renamed Kennedy School in 1969 in honor of the late president.

Gospel Hill - The area near 13th and Fort was known as "Gospel Hill" because of the concentration of churches located at one time in this area. Today in this area of downtown Hays, the Baptist and Catholic churches continue to have active congregations and their churches are visible near this intersection.

Ellis County Military Memorial - This memorial honors the soldiers from Ellis County who gave their lives while serving our country.

8th & Fort - Before the arrival of the interstate in 1969, Highway 40 (8th St.) was the main east-west road through Hays. At one time, this route had several hotels and gas stations and was used by thousands of travelers coming through western Kansas.

Philip Hardware Store - Initially built in 1874 as a dry goods store by Hill P. Wilson, this stone building was home of the government land office from 1875 until 1877. In 1894 the building was acquired by the Philip family and for 103 years, four generations of the family operated it as a hardware store.

Hays Arts Center Gallery - The Center is the home of the Hays Arts Council, Kansas' first such organization. Various exhibits and opening receptions are held throughout the year. The Five State Photography Exhibition is February to mid-March. The last Friday of April marks the opening of the Smoky Hill Art Exhibition and the annual Spring Gallery Walk.

Hays Public Library - A nationally-recognized leader for outstanding per capita usage, renovated and expanded in 2003 to match the original 1911 Carnegie library. It is also home to a dynamic young adult section, a beautiful gallery, a bookstore and an extensive Kansas collection with information about Hays, Ellis County, the western U.S., genealogy, Volga Germans, and Hays historical walking tours.

Ellis County Historical Society Museum - A variety of permanent exhibits, artifacts, displays, photographs and new exhibits throughout the year tell the story of Hays, Ellis County and the early pioneers. Includes the first stone church in Hays, a harness shop and gift shop.

Volga German Haus - This house was built from information obtained through diaries and other documentation passed down to the descendants and is furnished with authentic household items which were used by the Volga German settlers.

Fort Hays State University - Founded in 1902, the university sits on a campus of 4,160 acres of land that once was part of the Historic Fort Hays frontier military post. FHSU is academically superior to many comparable universities. It offers students an electronic learning and living environment, and is richly endowed by heritage and tradition.

Country Schoolhouse - Fort Hays State University - This one room schoolhouse was built in 1874 of native limestone. Displays, documents and artifacts are on exhibit.

Buffalo Herd - This small herd of buffalo is a remnant of the vast herds which once roamed the plains of North America.

The famous and infamous walked the streets of Old Hays City during the 1860's to 1880's including Wild Bill Hickok, Buffalo Bill Cody and General George Armstrong Custer. Twenty five bronze plaques mark the route and explain the historical significance of each site. Begin the tour near 13

Things to do Historic Markers near Hays, KS